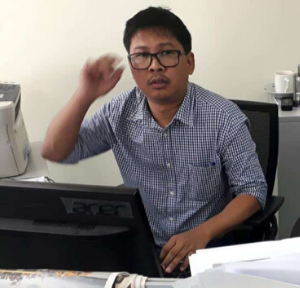 Wa Lone is a Reuters journalist, children’s author, and winner of the Pulitzer Prize for the international reporting with Reuters in 2019. with fellow reporter Kyaw Soe Oo, was arrested in Myanmar because of their investigation into the Inn Din massacre, and later awarded the PEN/Barbey Freedom to Write Award in 2018. Wa Lone and Kyaw Soe Oo were arrested on December 12, 2017, and held incommunicado for several weeks. The two journalists were charged on January 10, 2018, with violating the Official Secrets Act, a rarely invoked colonial-era law that punishes obtaining documents or images that might be or are intended to be “useful to an enemy,” and carries a maximum prison sentence of 14 years. Prosecutors alleged that journalists had obtained important and secret state documents relating to the crisis in Rakhine State; prior to their arrest, the journalists had been investigating a mass grave in the village of Inn Din. Pre-trial hearings began on January 23, 2018, and the pair were held without bail as their case moved to a full trial starting on July 16. On September 3, they were found guilty under Section 3.1.c of the Official Secrets Act and sentenced to 7 years in prison. On appeal, the Supreme Court upheld the original conviction and charges on April 23, 2019. However, on May 7, after 511 days behind bars, they were freed from Insein prison as part of a mass presidential amnesty of more than 6,000 prisoners, and were reunited with their families.