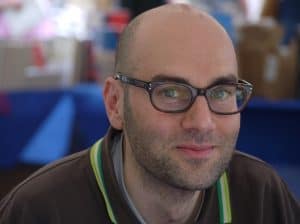 Viken Berberian’s work has appeared in The New York Times, The Believer, the International Herald Tribune, Bomb, the Financial Times and the Los Angeles Times. Viken is the author of the novels, The Cyclist (Simon & Schuster) and Das Kapital: a novel of love & money markets (Simon & Schuster). His graphic novel, La Structure est Pourrie, Camarade (Actes Sud), with illustrator Yann Kebbi, was published in France earlier this year. Le Monde described it as “hilariously funny and violent.” Viken’s fiction has been translated to Dutch, Hebrew, French, German, and Italian. You can read his short story, The Mattress, in the autumn 2017 issue of Bomb.

We are shocked to hear that the studio of the Kazakh artist Mimi Ilnitskaya has been deliberately destroyed by fire. This attack targets not only Ilnitskaya, but also artistic freedom in Kazakhstan as a whole.

PEN America's author conversation series #PENOutLoud is back! Each conversation this season asks us to reconsider the history we have been taught, remember the truth of the present, and reimagine possibilities for the future. See the full lineup here: http://pen.org/penoutloud.