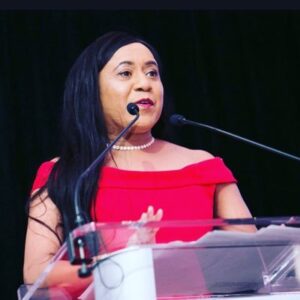 Rikki Nathanson (she/her/hers) is the senior advisor at the Global Trans Program, OutRight Action International. She is a fierce activist for the rights of trans and gender diverse persons, not only in her country but the region of Southern Africa, continentally and globally, Ricky was unlawfully and arrested for using a female restroom in 2014. After being acquitted, she took on the State of Zimbabwe with a civil suit. This act of bravery has proven to pose a risk to her life and has seen her fleeing her country of Zimbabwe and obtaining asylum in the United States of America.

In September 2015 she formed Trans* Research, Education, Advocacy & Training [TREAT], which seeks to address the rights issues in the education, advocacy and training about, and to, the basic violations of the human rights of the trans and gender diverse population of Zimbabwe in the areas of health, justice and the socio economy. TREAT is based in Bulawayo, Zimbabwe. TREAT was subsequently registered as a Trust in early 2017.