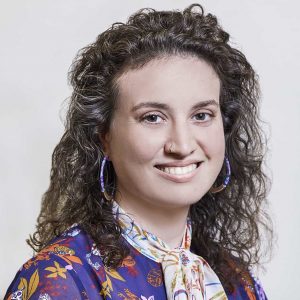 Nicole Marie Gervasio is the 2019-21 Mellon/ACLS Public Fellow and PEN World Voices Festival Programs Manager. A writer, teacher, and scholar, Gervasio has led creative writing workshops and seminars on human rights with a special focus on women’s and LGBTQIA+ issues for audiences including New York City teens, immigrant youth, incarcerated women, and university students. Most recently, she was at the Pembroke Center for Teaching and Research on Women at Brown University, where she taught a course on postcolonial horror and co-organized conferences and colloquia on decolonizing human rights discourse.

Gervasio received her Ph.D. in English and Comparative Literature with a certificate in Women’s, Gender, and Sexuality Studies from Columbia University. Her dissertation examined how politically conscious novelists from the Global South manipulate national archives to reconstruct histories of collective violence that authoritarian regimes have systematically repressed. As an undergraduate at Bryn Mawr College, she won First Place in the Glascock Poetry Contest, whose past winners include Sylvia Plath and Mary Jo Salter. Her academic work has appeared in Differences: A Journal of Feminist Cultural Criticism, Modern Language Studies, English Language Notes, and the anthology Women Mobilizing Memory.

While a Public Humanities Fellow with Humanities New York, Gervasio founded the Kaleidoscope Project, a tuition-free writing workshop that introduced teens to books that reflect their diverse identities and life experiences. In recognition of her teaching, she was the first instructor in Columbia’s history to win the Core Meyerson Preceptor Award twice in addition to the Presidential Award for Outstanding Teaching. As a first-generation college student, she appreciates the opportunity to manage PEN America’s DREAMing Out Loud and Worker Writers School programs as well as helping to curate the PEN World Voices Festival and other literary events.