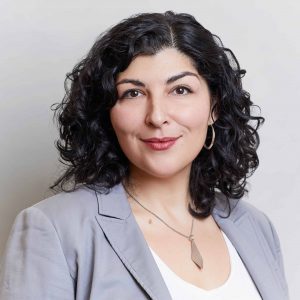 Nancy Vitale is the literary programs producer at PEN America, overseeing production of public programs including the World Voices Festival.

She has spent most of her career working at the intersection of arts and social justice. In 2016, she founded Eyes Up Here Productions to produce videos, podcasts, and narrative content that sheds light on critical stories and campaigns. Previously, she served as a creative producer for both Pop Culture Collaborative, a philanthropy that seeks to transform culture, and Fuel Change, a culture-change strategy consultancy. In 2010, she founded and served as the producing artistic director of Noor Theatre, producing the work of theatre artists of Middle Eastern descent. As a writer, she is developing two TV series, and has written films and plays that premiered nationally. She also worked in script development at TV Land, and dramaturged and produced new plays for leading New York and regional theatres.

Vitale earned her M.F.A. in theatre from Columbia University’s School of the Arts, and a B.A. in English from Oakland University.