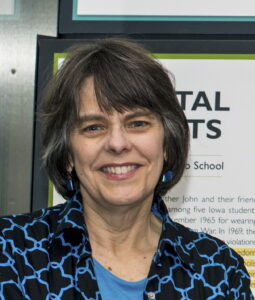 Mary Beth Tinker (she/her/hers) was born in 1952 and grew up in Des Moines, Iowa, where her father was a Methodist minister. As a 13-year-old student in eighth grade, Mary Beth was strongly affected by news of the Vietnam War. She and her brothers and sister, along with other students in her school, decided to wear black armbands to school to mourn the dead on both sides of the Vietnam War. The Des Moines school board threatened to suspend any student that wore an armband to school. Citing her First Amendment rights, Tinker chose to wear her armband to school. She was suspended. This was the basis for the Supreme Court’s landmark, freedom of speech ruling in Tinker v. Des Moines. The court ruled that students in public schools do have First Amendment rights. Justice Abe Fortas wrote in the majority opinion that students and teachers “do not shed their constitutional rights to freedom of speech or expression at the schoolhouse gate.” Tinker speaks frequently with student groups across the country to share her story, and to hear how students today are bringing the Constitution to life in their own communities.