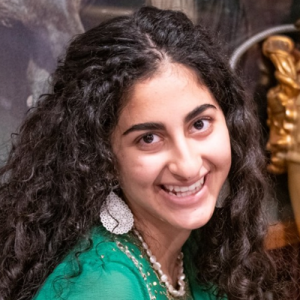 Malaina Kapoor is a fellow with Free Expression Programs at PEN America. She will be a freshman at Stanford University in September 2021. Kapoor is the recipient of two national gold medals from the Scholastic Art and Writing Competition. In 2019, she was named a Coolidge Senator, an honor designated annually by the Calvin Coolidge Presidential Foundation to 100 students who demonstrate academic excellence and an interest in public policy and service. She is also the recipient of the Caroline D. Bradley Scholarship, a merit-based scholarship awarded to 30 students annually nationwide. Kapoor is a trained opera singer and has given two solo performances at Carnegie Hall.