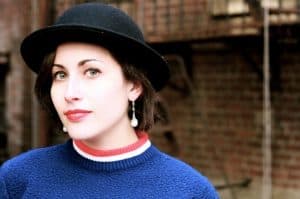 Born in the former USSR and raised a proud citizen of Chicago, Julia Alekseyeva is an author-illustrator as well as an academic. Her first graphic memoir is titled Soviet Daughter (Microcosm). She is a PhD candidate in Comparative Literature at Harvard, specializing in the avant-garde and film practices in France, Japan, and the former USSR. Julia has received press from publications such as Reuters, the New York Times, and Bloomberg Business for illustrating the first graphic novel legal brief, submitted as an amicus brief in USA vs. Apple. She has lived in Kiev, Chicago, New York City, Paris, Cambridge, Kanazawa, and Yokohama, and currently lives in Brooklyn with her partner Brandon and a dog named Leopold Bloom.