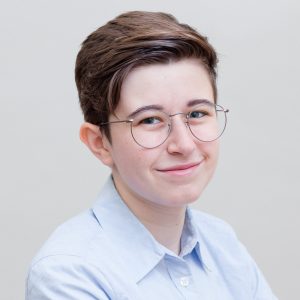 Harper Zacharias is the foundation relations assistant at PEN America, tracking and developing funding proposals, working with foundations, and handling donor research and communications. Zacharias has a passion for putting resources in the hands of those who need them to advance important missions and a firm commitment to the protection of free expression. Before joining PEN America, Zacharias served as the program director at Trans Student Educational Resources, a national nonprofit dedicated to improving the educational environment for transgender youth, where they supported programs at more than 500 schools, quadrupled the size of the organization, and raised over $150,000 for transgender youth.

While at Bard College, where they received their BA in political science with a focus on international relations and political theory, Zacharias spent three years as a research assistant for the Global and International Studies program, working on issues including great power transitions and U.S. foreign policy toward North Korea. Zacharias also spent two summers at the World Policy Institute as a research assistant and development associate. Zacharias also received the prestigious William J. Lockwood Award and has been named a Point Foundation Scholar, Hannah Arendt Scholar, and Ralph Ellison Scholar.