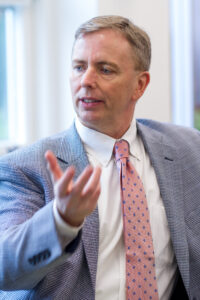 Frank LoMonte is a legal counsel at CNN and is the outgoing director of the Brechner Center for Freedom of Information at the University of Florida where he has served since August 2017. Previously, he spent nine years as the executive director of the Student Press Law Center in Washington, D.C. Before joining the SPLC, LoMonte practiced law with Sutherland Asbill and Brennan LLP in Atlanta and clerked for federal judges in the Northern District of Georgia and the Eleventh Circuit U.S. Court of Appeals. Prior to embarking on his legal career, he was an investigative journalist and political columnist. He was the capitol correspondent for the Florida Times Union (Jacksonville), Washington correspondent for Morris News Service and the Atlanta bureau chief for Morris. He was the Otis Brumby Distinguished Visiting Professor of Law at the Georgia Law School in spring-summer 2014 and has been a lecturer since 2015 in the University of Georgia Washington Program, teaching a course for undergraduates on “Law of Social Media.”