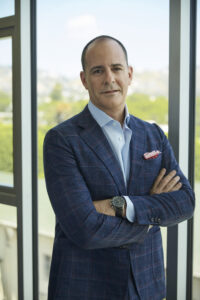 David Nevins serves as Chairman and CEO, Paramount Premium Group and Chief Creative Officer, Paramount+ Scripted Series. Nevins is responsible for the development and deployment of scripted originals, including both dramas and comedies, for Paramount+ and for overseeing all aspects of Showtime Networks and its channels, BET and Paramount Television Studios.

Since assuming his new role for the Paramount Premium Group, Nevins has led the effort among content leaders and senior executive across the company to maximize the use of creative ingenuity, talent relationships and IP to produce outstanding content that entertains and engages audiences and captures the cultural zeitgeist, domestically and internationally. Among his many achievements in this role is the successful collaboration between Paramount+ and SHOWTIME on the series HALO. In addition, Nevins’ leadership of Paramount TV Studios includes developing for Paramount+, with such series as THE OFFER and GREASE: RISE OF THE PINK LADIES, as well as a wide range of cutting-edge and entertaining television content across all media platforms for distribution worldwide.

Since Nevins joined the company in 2010 and under his leadership, SHOWTIME launched its stand-alone streaming service along with countless hit series, including the critically acclaimed originals YELLOWJACKETS, DEXTER: NEW BLOOD, YOUR HONOR, THE GOOD LORD BIRD, THE CHI, TWIN PEAKS, THE CIRCUS, BILLIONS, RAY DONOVAN, SHAMELESS and THE AFFAIR. The first project greenlit by Nevins at the network, HOMELAND, was the recipient of an Emmy® Award for Outstanding Drama Series, as well as a prestigious Peabody Award.

During his tenure, SHOWTIME has also become the industry leader in combat sports including boxing and Bellator MMA.

Before joining Showtime Networks, Nevins was an Emmy Award-winning producer and network programming executive. He served as President of Imagine Television from 2002-2010, where he oversaw development, production and was an executive producer on all Imagine Television shows. Under his leadership, Imagine produced Arrested Development, which won the Emmy for Outstanding Comedy Series, and 24, which won for Outstanding Drama Series. He also developed and executive produced Parenthood, Lie to Me, Shark and the critically acclaimed series Friday Night Lights, which received honors from the American Film Institute (AFI) for Television Program of the Year and the Peabody Award. Nevins also received an Emmy Award nomination for his work as an executive producer on the final season of Friday Night Lights.

Prior to joining Imagine, Nevins served as Executive Vice President of Programming at Fox Broadcasting Company. He oversaw all development and current programming for such series as The Bernie Mac Show, Malcolm in the Middle as well as the Emmy-winning first season of 24. Previously, Nevins served as Senior Vice President, Primetime Series at NBC, where he was responsible for the development and creative supervision of such renowned dramas and comedies as ER, The West Wing, Will & Grace, Homicide: Life on the Street and Law & Order: SVU.

In 2014, Nevins was awarded the prestigious Vanguard Award for Programmers, the top honor of the National Cable and Telecommunications Association. He serves on various industry boards, including the HRTS Board of Directors, the George Foster Peabody Awards Board of Advisors and the Paley Center Los Angeles Board of Governors, and he is also on the ATAS Executive Committee. Nevins currently serves as the President of the Board of Directors for the Friends of the Saban Community Clinic, who honored him with the Leadership Award at its annual Gala in 2013. In 2016, Nevins was honored with the Dorothy and Sherrill C. Corwin Human Relations Award from the American Jewish Committee Los Angeles, and in 2018, he received the Frank Stanton Award for Excellence in Communication from the Center of Communication.

Nevins graduated with a Bachelor of Arts from Amherst College. He and his wife, Emmy Award-winning and Academy Award® nominated documentary filmmaker Andrea Blaugrund Nevins, live in Los Angeles. They have a daughter and two sons.