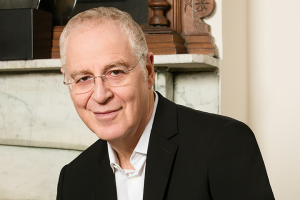 An honors graduate of Yale and Cambridge, Ron Chernow is one of the most distinguished commentators on history, politics, and business in America today. He has won virtually every major prize in American letters. A former president of PEN America, the Washington Post cited him as one of the “five most important public intellectuals in America today.” In September 2017, President Obama conferred upon him a National Humanities Medal at the White House.

Chernow’s bestselling books include The House of Morgan, winner of the National Book Award; The Warburgs, which won the George S. Eccles Prize; The Death of the Banker; Titan: The Life of John D. Rockefeller, nominated for the National Book Critics Circle Award; Washington: A Life, which received the Pulitzer Prize for Biography; Alexander Hamilton, nominated for the National Book Critics Circle Award and adapted into the award-winning Broadway musical Hamilton; and Grant, named by The New York Times as one of the ten best books of 2017.

A frequent contributor to The New York Times and the Wall Street Journal, Mr. Chernow is a familiar figure on national radio and television shows and has appeared in numerous documentaries. He has received eight honorary doctorates,  the lifetime achievement award of the Biographers International Organization, and is one of only three living biographers to receive the Gold Medal in Biography of the American Academy of Arts and Letters, of which he is now a member.

He is a proud longtime resident of Brooklyn, New York and is currently working on a book about the later years of Mark Twain.