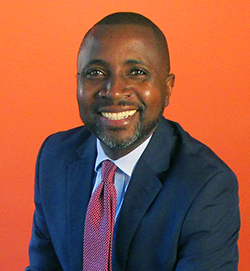 Bukeni Waruzi (he/him/his) is the executive director of Free the Slaves. He has documented human rights abuses, implemented advocacy campaigns, conducted training workshops and made public presentations in 40 countries in Africa, Asia, Europe and the Americas. In the Democratic Republic of the Congo, his home country, he formed the grassroots nonprofit group AJEDI-KA/Child Soldiers Project to confront the widespread enslavement of children by armed militias. He videotaped evidence that led to the imprisonment of a notorious warlord. In Kenya, Waruzi served as a program manager for the Porticus Foundation, overseeing projects on human rights, civic engagement, education and climate change. He served as executive director of Watchlist in New York, an organization that protects children in conflict zones. And he has served as a senior program manager in New York for WITNESS, a group that empowers victims worldwide to collect evidence that brings perpetrators to justice. Waruzi has made presentations to the United Nations Security Council, the International Criminal Court, and the Children’s Caucus of the U.S. Congress.