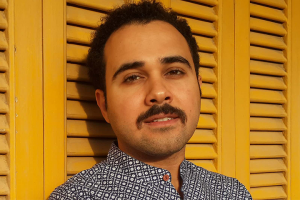 Ahmed Naji is the author of three books, a journalist at literary magazine Akhbar al-Adab, and a frequent contributor to other newspapers and websites in which he has criticized official corruption under Egyptian President Abdel Fattah el-Sisi. In February 2016, an Egyptian court found him guilty of “violating public modesty” for sexual content in his novel The Use of Life and imposed the maximum sentence of two years in prison. Naji’s case is emblematic of Egypt’s escalating crackdown on free expression that has in the past months expanded beyond press freedom and public demonstrations to also target artistic and cultural spaces, including the arrests of writers and raids of a number of art galleries, theaters, and publishing houses. Naji was honored with this year’s PEN/Barbey Freedom to Write Award, presented at the 2016 PEN Literary Gala. His brother, Mohamed, accepted the award on his behalf.