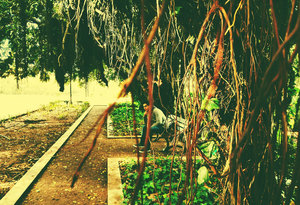 This week in the Guernica/PEN Flash series, we feature an original piece by Moroccan poet and autobiographical writer Abdellah Taïa, juxtaposed by two different translations by Chris Clarke and Emma Ramadan. We encourage readers to pay close attention to all the subtle yet important decisions each translator made to bring Taïa’s piece to life for English-language readers. These pieces were commissioned as part of the 2016 PEN World Voices Festival Translation Slam, where translators tested their linguistic mettle translating pieces under tight time constraints.

Subscribe to the series and get new flash delivered to your inbox twice a month—no spam or news, just stories.

A park, while we wait… (Un jardin, en attendant…)
By Abdellah Taïa, Translated by Chris Clarke

Morocco. Beginning of the 80s.

There’s a river. The Bou Regreg. And the sea. The Atlantic Ocean.

There are two cities. Rabat, the capital. Over there.
Far away. White. Rich. Inaccessible.
Salé: our side, my side. City of pirates, of
corsairs. Of the poor.

There’s the world. The idea of the world, and its fully visible borders, well accepted by all.

Where to go when you have nothing? Where to wander, to roam, when you are nothing?

It takes time for us to understand that the earth and the sky
belong to us all. To me as well. To my mother who is shouting. To my father who
smokes too much. As we wait for this revelation, we do what we can. We return
to the forest. We lose ourselves. We seek to exist exclusively through
our bodies.

And one day, the miracle transpires. Over on our side, without asking
our opinion, a park is built. For everyone. With benches, green grass,
a few trees, and even a court where we can play
basketball.

It’s bewildering. Is it for us, this space? Really? They
haven’t made a mistake? It isn’t for the people of Rabat?

At first, we snub the park. We’re not accustomed to it. We don’t know
how to occupy this new territory, what to dream up to make
ourselves feel at home with its architecture. Its geography is not our own.
Its organized empty space is destabilizing. Separating. Its benches demand a decorum
that we don’t possess.

We don’t like it, this park. We refuse it. We ignore it. We forget it.
For several months.

With my childhood friends, I go on playing barefoot in the
dirt, in the dust. That’s us, that contact with the primordial
elements, “savage.” We have to stay that way. We have to resist
the ideas of the others, those above us who don’t know us and
who will never, ever, come to see us.

We decide to keep to our own territory. Let it rot, this
ostentatious park of theirs. Let it be burnt by the sun and by
boredom. Let it vanish! We want nothing to do with it! Did you hear me?
Yes? No?

The poor must remain poor. It isn’t a so-called
“modern” park that is going to get them out of this poverty,
a poverty imposed and endlessly painted over by those in power.

We understand. We’re not going to let this be done to us.
Our resistance has been set in motion. It will continue on. Forever. Forever.
Do you understand?

The children have grown up. I’m 13 years old. I am becoming a man. Another
border to cross. But I don’t want to become the man the others demand,
that they command I be. I’m different. Homosexual. But deep down,
I don’t feel that I’m different at all. I am a poor man among the poor.
There’s no difference. I don’t want to leave that group. That
world. I don’t go to the park either. So where does the difference
lie? I can’t see it at all. But the others, family, friends,
certain adults, they see it all too well. They tell me so.
They shout it.

What can I do? Get in fights? Cause a scandal? Hang my head?

I choose the third option. I am pushed a little at a time towards
solitude. Emptiness. The park.

I stop speaking. And I begin to roam. I go to the park. I still
don’t like it. But I go all the same.

I discover that I’m not the only one to go there. The elderly also
frequent it in the afternoon, after the third prayer. Men in
their sixties worn out by a violent society, worn right down.
Cast off. Without love. They are waiting for death. They play cards,
over and over again. They dream up new ways.

I approach them. I watch. I grow attached. I come more and
more often to their meeting place.

I’m young. So old. With these fathers, fathers of families, sometimes there is
joy. Peals of laughter. Gestures of tenderness. They give me
advice I will never follow. But I listen to them. I can guess
their fears. Their frustrations. Their solitude. They no longer have
the strength to resist. They are waiting. Like all of Morocco. I feel a
sense of solidarity. And my deepest feelings are confirmed. I am homosexual
but I am no different from these men.

The old men made a place for me among them. They could see who I was. They said nothing.

One evening, I am alone in the garden, I have lingered. Night. It’s dark. Some people arrive. They have bottles of cheap wine in hand. I follow them with my gaze. They are far away. On the farthest fringes. Drunkards. Vagrants. Prostitutes. I’m not afraid. I go over toward them.

I resist, next to them. Plainly. Naively. Lovingly.

A Garden, While Waiting
By Abdellah Taïa, Translated by Emma Ramadan

Morocco. Beginning of the 80s.

There is a river. The Bou Regreg. And the sea. The Atlantic Ocean.

There are two cities. Rabat, the capital. Over there. Far. White. Rich. Inaccessible. Salé: our side, my side. City of pirates, of privateers. Of the poor.

There is the world. The idea of the world and its boundaries, so visible, so internalized by everyone.

It takes some time to understand that the earth and the sky belong to everyone. To me, too. To my mother, crying. To my father, who smokes too much. While waiting for this revelation, we do what we can. We go back to the forest. We get lost. We try not to exist anymore except as bodies.

And one day: the miracle happens. On our side, without consulting us, they build a garden. For everyone. With benches, a lawn, some trees, and even a basketball court.

Bewilderment. This is for us, this space? Really? They haven’t made a mistake? It’s not for the people of Rabat?

At the beginning, we snub the garden. We’re not used to such things. We don’t know how to inhabit this new territory or what to invent to familiarize ourselves with its architecture. Its geography is not our own. Its organized void is destabilizing. Distancing. Its benches exude a bearing that we lack.

We don’t like it, this garden. We refuse it. We exclude it. We forget it. Several months.

My childhood friends and I continue to play barefoot on the ground, in the dust. That’s us, this contact with the elemental, the “savage.” We have to stay like that. We have to resist the ideas of others, those on high who don’t know us and don’t come to see us, ever.

We decide to stay in our territory. Let it die, their sophisticated garden! Let it be burned by the sun, by boredom! Let it disappear! We don’t want it! Do you understand? Yes? No?

The poor must remain poor. It won’t be a so-called modern garden that releases them from the poverty imposed upon them and constantly covered up by those in power.

We have understood. We will not let ourselves be had. Resistance is underway. It will continue. Always. Always. Have you understood?

The children grow up. I’m thirteen. I become a man. Another boundary to cross. But I don’t want to become a man like the others order, demand. I am different. Homosexual. But, in the end, I don’t feel different at all. I am poor among the poor. No differences. I don’t want to leave this group. This world. I don’t go to the garden either. So where is the difference? I don’t see it at all. But the others, my family, my friends, some adults, see it quite well. They say it. They shout it.

What to do? Fight? Cause a scandal? Hang my head?

I choose the third option. I am pushed little by little toward solitude. The void. The garden.

I stop talking. And I start to wander. I go to the garden. I still don’t like it. But I go there anyway.

I discover that I’m not the only one who goes there. The elderly also go in the afternoon, after the third prayer. Men in their sixties worn down by our violent society, done in. Rejected. Loveless. Awaiting death. They play cards, again and again. They invent something else.

I approach them. I watch. I become attached. I go to these meetings more and more often.

I am young. So old. With these patriarchs, sometimes, there is happiness. Bursts of laughter. Tender gestures. They give me advice that I never follow. But I listen to them. I sense their fears. Their frustrations. Their solitude. They no longer have the force to resist. They wait. Like all of Morocco. I feel…solidarity. And my underlying feeling is confirmed. I am homosexual but I am not different from these men.

The old men gave me a place among them. They saw who I was. They said nothing.

One night, I’m alone in the garden, I linger. Night. Darkness. People come. They’re holding cheap bottles of wine. I watch them. They’re far. Transgressive. Drunks. Bums. Prostitutes. I’m not afraid. I go toward them.

I resist at their sides. Simply. Naively. Lovingly.

These pieces were originally read at the 2016 PEN World Voices Translation Slam.

Abdellah Taïa is one of the first openly gay autobiographical writers published in Morocco. He is the author of many books, such as Mon Maroc (My Morocco), Le rouge du tarbouche (The Red of the Fez), L’Armée du salut (Salvation Army), Une mélancolie árabe (An Arab Melancholia), and Le jour du Roi (The King’s Day), which was awarded the prestigious Prix de Flore in 2010. The English translation of his novel Infidéles (Infidels) by Alison L. Strayer has been published this year from Seven Stories Press.

Emma Ramadan is a literary translator and an editorial assistant at Restless Books. Deep Vellum published her translation of Anne Garréta’s Sphinx in 2015, which was longlisted for the PEN Translation Prize and the Best Translated Book Award, and will publish her translation of Garréta’s Not One Day next year. She is also working on books by a number of Moroccan authors, with excerpts featured in the March 2016 issue of Words Without Borders showcasing untranslated writers from Morocco.