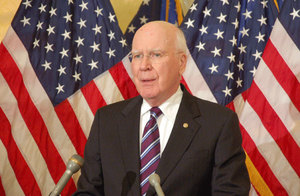 PEN American Center welcomes today the introduction of Senator Patrick Leahy’s version of the USA FREEDOM Act and urges the Senate to pass this version before the August recess period begins.

Senator Leahy’s bill fixes key weaknesses in the House version of USA FREEDOM, opening up surveillance practices to heightened public scrutiny and strengthening Congressional oversight of secret programs that have run roughshod over privacy and free expression protections. Most importantly, the bill would end bulk collection of domestic phone records under Section 215 of the Patriot Act. It also requires the government to lift the curtain on some aspects of its surveillance programs and allow companies to disclose more information about government orders they receive. The bill would establishes a special advocate for the FISA Court to press for the protection of privacy and civil liberties in relevant Court proceedings, and would require the Court to declassify more information about its opinions and decision-making processes.

Since 2004, PEN has called for reforms to dragnet surveillance programs that threaten constitutional and human rights. PEN’s groundbreaking 2013 report, Chilling Effects, showed that one in six U.S. writers is already engaging in self-censorship due to mass surveillance. Senator Leahy’s bill represents a historic effort to rein in the NSA’s dragnet surveillance programs and a badly needed first step to reassure writers, artists, and all citizens of the restoration of our rights to privacy and freedom of expression.