U.S. Election Frontrunners Must Respect and Protect the Role of the Press 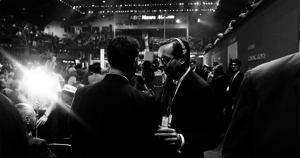 The news media’s role as the watchdog of democracy is vital. At a time of turmoil at home and abroad, with a pivotal election looming, the public’s need for information and interpretation is pressing. Journalists working across all media formats can represent our best hope to foster transparency and root out corruption, hold officials accountable for their actions, and explain complex political and legal questions in ways that foster reasoned debate.

These roles can place the media in a contentious relationship with politicians and their supporters. Accusations of press bias or inaccurate reporting amid a heated political cycle are nothing new. But during the 2016 campaign, candidates have at times restricted reporters’ access to their campaign operations and engaged in or tolerated attacks on individual reporters. These developments have erected new hurdles for journalists trying to do their jobs and raise serious concerns about press freedom in the United States.

Last fall, presidential candidates and party leadership set the tone by slamming CNBC and FOX network anchors moderating the primary debates, accusing them of bias, provocation, and “stupid questions.” While criticisms of press performance are not atypical and themselves constitute protected speech, they have at times taken a pointed and contemptuous tone that risks impinging upon journalists’ ability to work free from harassment and vitriol. The presumptive Republican nominee Donald Trump has been cited for going beyond routine criticism with personal attacks on journalists including comments targeting their gender, physical disabilities, and other attributes unrelated to their coverage. Trump has dismissed critical coverage of his campaign as “dishonest” and has referred to the media as “scum,” “horrible,” “illegitimate,” and “terrible people.” He also lambasted journalists as “sleaze” for their questions about his $6 million fundraising effort for veterans groups.

More troubling have been actions designed to limit access to the news. Trump recently revoked press access for the Washington Post, adding to a list of other more than a half dozen significant news outlets similarly banned from covering him or attending his campaign events as media representatives. He has also threatened to “open up” libel laws as president to make it easier to sue media outlets, presenting a direct threat to First Amendment freedoms; Trump has a history of suing opponents for defamation and libel for voicing critiques of him and his enterprises.

At a different but disturbing level, campaign supporters have directed menacing vitriol at individual journalists online, met by only muted discouragement from their respective candidates and campaigns. Political reporters have faced online threats, abuse, and harassment by self-avowed supporters of both parties when coverage included opinions or even facts they disputed. In early June, the Associated Press released a warning after several reporters received threats from purported Bernie Sanders supporters after the AP named Hillary Clinton as the presumptive Democratic nominee. New York Times correspondent Amy Chozick also allegedly received death threats from Sanders supporters for a co-written article describing Clinton as the presumptive Democratic presidential nominee. Journalist Julia Ioffe received a torrent of anti-Semitic threats and abuse, some including graphic Holocaust-related imagery, after writing a profile of Donald Trump’s wife for GQ. Others including New York Times editor Jonathan Weisman and freelancer Bethany Mandel have been similarly targeted. These tactics constrain informed debate. When candidates fail to swiftly and unequivocally condemn such tactics, they can give tacit license to them.

It is also important for candidates to make themselves accessible to reporters. Although Clinton has given individual interviews to print and broadcast journalists, she has not held a general access news conference since December 2015 in Fort Dodge, Iowa. Her campaign has since been criticized for rarely answering questions from her traveling press corps. Sanders also came under fire in May for holding a press conference in which he took no questions, leaving after a brief set of remarks on health care.

As we approach the Democratic and Republican Party Conventions later this month, please join PEN America in calling on both parties—including political candidates as well as their supporters—to respect and protect the vital role of the press by granting reporters unfettered access to events and candidates, making clear that personal attacks on journalists are unacceptable, and demonstrating their commitment to media freedom through their words and actions.