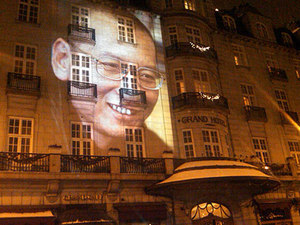 Last week, the U.N. Working Group on Arbitrary Detention, a panel comprised of independent legal experts, ruled that 2010 Nobel Peace Prize Laureate Liu Xiaobo, currently serving an 11-year sentence in a Chinese jail, and his wife, Liu Xia, under de facto house arrest, are being held in violation of international law, and calls on the government of China to release them immediately.

This development is significant not only for the Lius, but also for the more than 40 other writers in prison in China today and for what it says about China’s use of subversion laws to jail writers for their work.

In its verdict delivered on Christmas Day in 2009, Beijing court cited seven sentences Liu Xiaobo penned as a basis for his conviction for “inciting subversion of state power.” As part of the process in determining whether a person has been arbitrarily detained, the working group opens up the discussion to the government of that particular country for comment or rebuttal, and the Chinese government used this opportunity to argue that Liu was justly charged, because his work—his words—amounted to a threat to the state’s security. It is this argument that the working group rejects outright.

In short, the words Liu Xiaobo was convicted for, and other writings like it, are fully protected under international law. PEN is of course thrilled by the working group’s decision and this clarion call to the government of China to end its use of subversion laws to jail writers simply for exercising their fundamental right to freedom of expression, and we re-issue our call for his and Liu Xia’s immediate and unconditional release.