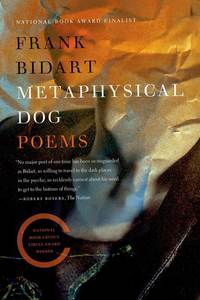 Those nights when despite his exhaustion or indifference
you persisted, then finally it

caught, so that at last he too

wanted it, suddenly was desperate to reach it,
you felt his muscles want it

more than anything, as if through this chaos, this

wilderness he again knew the one thing he must reach
though later, after

he found it, his resentment implied he had been forced.

Those nights ended because what was
missing could never be by
the will supplied. We who could get
somewhere through
words through
sex could not. I was, you said, your
shrink: that’s how
I held you. I failed as my own.

Now you surely are dead. I’ve searched
the databases: you everywhere
elude us. Long ago without your
reaching to tell me, surely
the plague killed you. Each thing in your life
you found so
incommensurate to the spirit
I imagine that becoming
untraceable makes you smile.

For two years, my father chose to live at

The Bakersfield Inn, which called itself
the largest motel in the world.

There, surrounded by metal furniture

painted to look like wood, I told him that I
wanted to be a priest, a Trappist.

He asked how I could live without pussy.

He asked this earnestly. This confession
of what he perceived as need

was generous. I could not tell him.

Sex shouldn’t be part of marriage.

That she loved and continued to love him
alone: and he, her: even after marrying others—

then they got old and stopped talking this way.

Ecstasy in your surrender to adolescent

in which you are free because bound—

in which you call the God who made
what must be obliterated in you love.

In a labyrinth of blankets in the garage

at seven
with a neighbor boy

obverse of what underlies everything.

Chaos of love, chaos of sex that
marriage did not solve or

mask, God did not solve or mask.

Grant and Hepburn in Bringing Up Baby,

in which Grant finally realizes being
with her is more fun than anything.

What they left behind

they left behind
broken. The fiction

even they accepted, even they believed

was that once
it was whole.

Once it was whole

left all who swallowed it,
however skeptical, forever hungry.

The generation that followed, just like their
famished parents, fell in love with the fiction.

They smeared shit all over

their inheritance because it was broken,
because they fell in love with it.

But I had found my work.