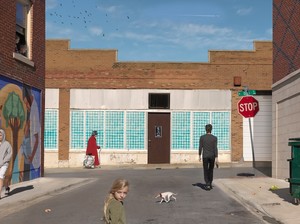 There in the window it was speaking
to an expanse and wider
sense, noxious, nightly perfume
trails sidelong then
more away. I did doubt the little
sparer house its rooms
opened to dark, to further thought we first
saw the grove there, as is it
just is, was imminent despairing spent
over breakfast. There in double
window panes it hung
its fruit, airing
bitterly its juice, its chiming
to us a history. Swaying to us, we
preposterous two,
against silence a cracking of hands that
there in windows
framed us. I perform well
my surface for you. There, to quote
a window, is spun like tops.
He there of the slight, bent frame
conducts a symphony, lies
down upon a year’s heat
still waving. There in the window it
remembers a chaos
lacking snow, what will excuse
our sleep then, the balcony, driving both
hands into the space I
am allowed. Not broadly gaming
a day and there, in the bend
of a window see it becoming some
late other self.

Unrested we said to others to leave
us pleased, not far along our track, still much

we want, half the slower good death
of cities too off your bristling map.

People demand two and then more hours
in a room already settled. Reverently I

am a kind of pulled down, mucking poorly
the clean slate, it was only how we

say tragic, notes shoved off
into blue air. In morning asking others

how not to die and bury, when is a resting
all together now to music. Set upon a high place once

and am ruined, what is after drawn
sweetly by love, doors fixed

to a theme, likely then we wash ourselves
against one another.

Brilliant analysis by my colleague @MattBailey0 here @PENamerica of the flurry of bad ideas emerging in Washington to "fix" the problem of Section 230, otherwise known as the 26 words that created the Internet
https://pen.org/three-and-a-half-ways-not-to-fix-the-internet/

NEW: Chile has filed a lawsuit against the feminist artist collective Las Tesis. Our @AtRiskArtists director Julie Trebault says it's an attempt to censor them. https://bit.ly/38nzGsE