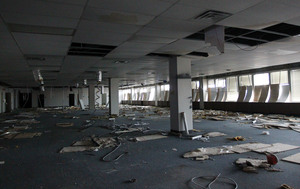 Home on the Range

There are times where no one else exists.
They are more like places.

I love the great American west
where the moon hunts us
for a living.

It draws closer and then away from me.
Me! Where I cannot be stopped.

imitable processes, I am
with an increasing frequency becoming.

I’m out thinking of wind
in a low presence of wind,

bending to stir the scrub and sage
that attends the heart’s climb
from ridge to ridge.

Of feelings, of course.

The past must be a jerk, all those bonfires,
dead dogs, a herd of horizons
with me at its back. I nip and I nip.

by the military. Being in love is like
almost knowing what is about to happen
before you are ripped apart by the sun
and its belly.

Like finally finding inside a haystack
there’s a more beautiful
haystack.

From what did love all of a sudden
rear up? Or the knife

in my hand, where having one
means I believe in my life

From the middle, you can see a tower.

No money in the mug.
A more affordable medicine under the mattress, no.
There’s the door.

When in the morning the stampede of metal hits the earth,
when it troubles the underearth with its teeth, none of it is paint.
Skim of your breastbone, none of it.

Steam rises up out of the work like more work.

In the opposite of woods, in the red ever, I am hungry and you are.

I used to have this job, the bodies entered all at once in a line, towing their essentials.
Workers left, as I, it’s hard to say whether it was for love.

Now I enter the sky alone, paint anything that can make you look up from your driving.

You need not have an actual pig pressed into your mind in order to have a mind of bacon
is a principle I cling to when hanging from a billboard’s girders.

On his way home from the office, a man calls his love.
He’s just seen a new way to make their home better and it’s only 50’ tall.

If you look closely there’s a little someone flapping from each billboard like a flag.
Like the calm after the application but before that next moment.

A particular method of extinction by hope.

I used to sidle up to the wall, stall there and curl. Wait for you to come home.

Paint your shadow in the doorway for you to step into and delight,
small and smelling like a coin behind each ear.

At quitting time the factory of me all bursts apart.

Until then, I’m forced to consider how the function of the individual screw may be beauty, balletic.

The drill bit in its business of displacement sends up into the air a fine spray.
What’s left can’t afford to stay.

I can’t account for when in the day my hair moves,
and yet it tumbles from this to this.

And yet I am away from you badly.
It itches, to be gone, and I am poor from it.

You have not been made of flowers.

Architecture I loved, I should have been.
I’ve always had a spark for a fine building.

You rest in an angle of our home, functional,
where I am permitted to notice.

You are, and are held up by it as time eats the ridge’s edge.
As I am held up by your color in flower pressed in mind.

When a man remarks on a quality of a building
it is mercy that allows him to use his own mouth.

In sun when it mallets one side of the toolbelt I’m under I’m earning my pleasure.
I’m earning the smile I’ll spend on you after, watching you tear into the rabbit.

Butter, mustard, tarragon, we secreted away the rabbit in the sock drawer,
we spent the very idea of it, we turned the room over when we thought it lost,
we turned each other out, we overdrew, we sent it down our throats.

It opens on a tower, the middle, which has showcased repeated arrivals of the loved one
in the driveway. The scrape a body makes. The sun’s many movements.

A window used to be used to say soul. Say eyes and be enveloped by the odor.
Would you get close enough to a painted sign to smell it?
It is a windowless room when you put it like that, its fumes swaddling the brain organ.

For how the window frames my coming home to your dismantling of meat,
I tell you, I would anything, would turn myself out.

The last dust of day’s sky’s pitched, dark having rubbed the it out of it.

A long, smart swath of black on trees, efficiently employed.

Now here is a palate that turns the mind to commerce,
beyond where what we might say about what’s beyond the window, love, the rabbit, is.

This slow skid from metal to ash, and you: that, I, for the whole sold world, call tender.