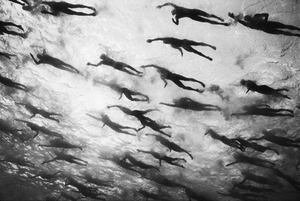 Juan, Juan et su fils? said the dream.
Have a drink in the ancient Roman light that flares
on the strange American faces
on the airport train. Juan, Juan, my
countrymen and women, no offense but
how did you get so
fat
gray
badly cut
unread
small-eyed
woolen
while I was away? I was gone and when I came back
you’d voted for the wrong politicians! So many men!
Had I slept for five minutes and found you
on the subway saying all the wrong things or
in the meadow to the starlings?
You’ll feel like the waist of an otter in the teeth of a tiger and wonder
how hell is dressed with poorly—
how it’s haunted by badly pissed-off persons or people
These people, for example, forgetting
to make themselves happy
built the entryway but forgot to build the building
used up all the wood & coal & sky & ice & light
Now ¿Dónde viviremos?

[See the happy ring in the pond around my]

If you took a picture from here you could almost see the craters—
landing sites from Apollos
12, 14 & 17
along with the last foot trails left on the moon
(from the Lunar Reconnaissance Orbiter Camera you would see them better)

“See the happy ring in the pond” and “Juan, Juan” are reprinted by permission from Make Yourself Happy (Coffee House Press, 2017). Copyright © 2017 by Eleni Sikelianos.

On Wednesday 10/20, we're excited to co-present "Media Literacy in Tribal Communities and Protecting Collective Health" with the National Congress of American Indians (@ncai1944). Sign up for this interactive media literacy workshop today: https://bit.ly/3AIwbJz.

Why do you defend human rights? What does human rights mean to you? Express how you #StayWithDefenders by submitting your work to @ProtectionInt's Poetry Challenge. All levels of experience are welcome, and all poetry styles are accepted. Learn more: https://bit.ly/3vb4ZlM

Today marks 4 years since journalist Daphne Caruana Galizia's brutal murder. We demand #JusticeForDaphne and urge the Maltese government to implement the findings of this year's public inquiry to protect journalists and #PressFreedom. https://politi.co/3aIxJZG