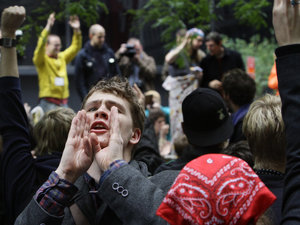 for Sarah Vap & after her book End of the Sentimental Journey: A Mystery Poem

Because Sarah I am also sad at the Saran Wrap-
covered orifice on the receiving end of someone taking a dump
as an act of sexual pleasure (which end?)
and I want to turn away but I don’t think I want to stop it.

And I also don’t want anyone to knock me hard in the back of my head
to black me out as an act of (whose?) pleasure either.
But could this be a pleasure?
Here. I have two open hands. Many holes.
A soul with whistling, it’s so permeable.

As a girl at six I lay in bed at dusk
and held my breath
while I pulsed the sphincters around my spongy, alchemical g-spot (real!)
until I’d come and almost pass out,
preferably almost at once.
I remember the taste and smell of the yellow Dacron blanket
as it fuzzed its afterglow into my itching mouth.

I am not alone in this.
Alone, ok, maybe in the scratchy yellow petroleum-based blanket under my chin
and alone perhaps in girl-doing this,
alone perhaps in g-spotting it instead of clitting it,
in doing it at six.
But not in holding my breath to make myself almost pass out while I come.

Once we were roommates and couldn’t sleep:
there was oh so much to talk about.

But what about when what we want is a little harm?

I do not go in, sexually, for the shit or the sucker punch,
but here’s what I’m finding out I do like:

shove me against the wall

bite my bottom, no, harder, so I can feel it through the fat and sinew

just after I come and am glazing off into the sunset, slap my face

I didn’t know I liked these things, but I do,
and they remind me in the sweetest ways of my childhood.
Not of any abuse or harm, but of the satisfaction of a little violence enjoyed.

They remind me in the sweetest ways of my animalhood.

I once read an article about Jerry Garcia’s wife Carolyn, called Mountain Girl,
and thought she was so beautiful, and her name so beautiful and wild and free,
which is also a little how I thought of you when you lived with your boys
in the rainy mountains and your long dark night of hair
and your daytime daytime eyes.

I don’t even care for the Dead.

I mean the band. I do care for the dead: like you, Sarah, I love ghosts dearly.
Love a good day to die.

Sarah, I want to tell you that we defeated the bid
for the building of the petroleum tank
here where the mountains meet the sea.
We stood in a circle as big as the tank,
me and the kids and Rob and Mike and hundreds from town and the county,
did the People’s Microphone to let everyone know about the hearings,
and we sang songs and held hands and it worked.
Magic. No petroleum tank.
They went away.

I hope your baby will be born in a good hour.
I hope you will experience no harm at the hands of others.

And here is something else I’m possibly into:
forced orgasm.
Weeping from being caused too much pleasure.

“We’re here to devour each other,” my son says.

I thank him for this, and kiss him goodbye, so I can go off with my boyfriend, the one my son calls “the gorilla,” to a clothing-optional spiritually-driven sex camp in the rolling hills of riverside Maryland for a few days of pagan-inspired springtime romping.

I buy a dress that looks like butterfly wings from a woman in a leather loincloth.

In the class we attend on “energy” in a rustic cabin, we’re given a guided meditation and told to enter the room of our consciousness through the glowing indigo orb of our third eye. I picture a black void, boundaryless.

“Now decorate it,” the teacher says.

I will not. My void needs no décor.

“Now find a safe space to lie down in it.”

I refuse safety. I dissolve myself.

“Now look out a window to your daily life.”

My void has no window. I know I am being petulant, which is not perhaps the most evolved of states, but I don’t care: I didn’t make a window, and won’t know.

“Now know that you can decorate your daily life in the same way you decorated your room.”

On our way from Maine to Maryland along I-95, in every town, there’s a TGIFridays.

I wave my hands and now it, too, is a gorgeous void.

I hope I will meet a wild animal in the road, and that it will be the death of me.