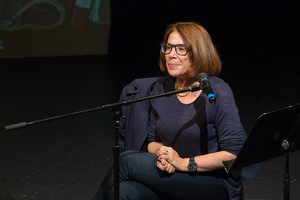 This piece was read by Sabina Berman at the event Mexico In Two Acts during the 2016 PEN World Voices Festival. During Act I of the event, Berman delivered her personal view on contemporary Mexico’s prevailing sociopolitical and cultural phenomena. In Act II,  a panel of authors comprising Jennifer Clement, Claudio Lomnitz, Pedro Angel Palou, and Marcela Turati responded to and debated the opening lecture.

Writers often write to give voice to the voiceless. In my latest play, for example, I have given voices to cows. Two very Buddhist cows. More often, writers give voice to what is voiceless—and hurts—in human society. Hablamos por la herida, as we say in Spanish, we talk through the wound.

However, given what is happening in America—that river of hate against Mexicans that is inundating public discourse, I feel that my moral duty today is precisely the opposite: to describe not what hurts in Mexico, or what hurts in the relationship between our two countries, but to describe the bigger picture of that relationship. The bigger picture that is, in fact, ignored—what is not said, what is forgotten when Americans now talk about Mexico.

Maps say that Mexico and America are two countries divided by a border.

What is more interesting is that in everyday life, that isn’t true anymore, either: Mexico and America are two countries whose border has become irrelevant.

It has become irrelevant because above it, every day, from Monday to Sunday, no less than 1,500 airplanes fly from north to south and from south to north.

(And I ask you to hold that image for a moment in your mind: 1,500 tiny airplanes in the sky: a veritably massive air fleet that crosses above the border, back and forth, every day.)

While every time an American sits down to eat a meal 70 percent of what he eats has been cultivated or raised by Mexican peasants, working on the fields south and north of that so-called border.

So, the paranoid gringos, Mr. Trump and Mr. Cruz, and their kind, need to be told: do not fear the Mexican invasion of America. Relax: it already happened, 10 years ago.

No, the border is not what defines our two countries in this day and age. If one has to choose a single image to capture our intense and complex relationship, that image would be a network of communicating vessels.

And today I would like to describe, by way of example, merely three sets of these communicating vessels that connect our two countries.

Let’s go shopping at a Mexican supermarket. Please notice that out of every six products on the shelves, four have American brand names. Coca-Cola Company. Sunbeam. Kraft.  Lipton. Budweiser. Tide. Philip-Morris. Nabisco. On and on.

The American brands that rule over the shelves of Mexican supermarkets, and the fact that in San Antonio, six out of every ten residents was born in Mexico or to Mexican parents, are not isolated facts.

They are facts connected by a sequence of causes and effects.

Here’s the story:
Three decades ago, an American president said in Berlin, referring to the wall that divided the communist world from the capitalist world: Tear down that wall.

And that wall was, indeed, torn down.

By then, America had decided to open up the borders of all the countries in the planet to commerce. And it did open them up, often in a most friendly fashion—knocking at the doors of the countries, knock knock—but sometimes, in a less cordial fashion—crashing through them with bombs, boom boom.

Well, no government in the world accepted this new American deal more gladly than the Mexican government.

And thanks to the new free trade agreement between our countries, American brand names have come to dominate the market of consumer goods in Mexico, bringing about the destruction of a great deal of our industry and agriculture, which is why a great many jobs in our fields and our factories have vanished, while the new gringo transnational corporations have created millions of new jobs in America, in Mexico, and in other countries.

Which is truly why millions of farmers and workers have left Mexico for the North, for your country, both legally and illegally, and millions in Mexico have entered American-owned factories.

No, 37 million Mexicans didn’t tiptoe by night to cross the border to get a better life—which is the story Americans repeat in books, movies, and newspapers—the Mexamericans are the result of globalization, which, by the way, has enriched America enormously. According to Joseph Stiglitz, in the last 30 years it has doubled America’s wealth.

I invite you now to Berkeley. A few years ago, I was teaching at the University of California at Berkeley, and I learned you cannot understand Mexico City without Berkeley.

At Berkeley, as you are no doubt aware, the civil rights movement was born. The second wave of feminism was born. And finally, queer theory was born.

Well, my generation is the one that, since the 1990s, has taken up those struggles in Mexico City, and today Mexico City has surpassed Berkeley in terms of rights and freedoms.

Today in Mexico City, a person may choose to change their birth certificate to boy, girl, or fish. One may choose whether or not to become a mother at clinics paid for by the state. One may marry whomever one chooses: man, woman, or chimera. Any citizen may smoke five joints of marijuana in the park—if he is crazy enough to smoke five churros one after the other in the park. There are more women in the mayor’s cabinet than in the cabinet of California. And the pride parade for the LGBTTTRXZ community—give or take an initial or two—with its gentlemen wearing hot pants and butterfly wings and its ladies wearing moustaches, marches for several miles every year until reaching its destination right outside the presidential Government Palace.

What we encounter is this: a region the size of the state of Delaware, with no electricity and no landlines, just emerald green fields of marijuana.

Now let’s go to the University of Kansas on a Saturday night. And let’s attend a frat party. Let’s see the young gringos smoking marijuana like students used to drink martinis in the 1950s.

For a more gloomy prospect, let’s visit a small town in New Hampshire, whose name I’ll choose to forget, because I am about to say some nasty things about this little town.

People here are not fat; they are obese. It’s a community of fat people painted by Botero who don’t walk, they roll; who do not work, they are on welfare. And they spend their days watching TV and getting high on prescription drugs that contain heroine derivatives, or they just go ahead and shoot up—and fly like balloons.

Well, in the Golden Triangle, every season, marijuana fields are being supplanted by fields of poppies because another hundred thousand Americans have gotten addicted to heroin.

Now let’s watch the persecution of drug traffickers by the Mexican army, armed with American guns. Let’s listen to the machine gun fire. Bodies fall, riddled with bullets, above all on the side of the traffickers, on the side of the illiterate warriors stupefied by drugs. Young men between the ages of 16 and 25: the sacrificial victims of the drug trade that makes it possible for the obese people of New Hampshire to continue watching TV all day, sitting there eating popcorn and, now and again, between one kernel and the next, popping a pill.

So, my friends, 30 years ago an American president said, Tear down that wall, and the border between our two countries became irrelevant.

Ignoring for starters that what has made you Americans extremely rich is precisely tearing up walls.

Ignoring that the relationship between Mexico and America is mostly beneficial for both sides, and what is not, what is terribly wrong, the deadly drug traffic, cannot be solved by a wall mainly  because there are these new machines—airplanes they are called—that fly over walls, and this old thing called tunnels, that run under walls, and of course there are ships, that go around walls.

And ignoring finally that—contrary to what the shrieking mobs believe—the enormous wealth produced by globalization won’t come back to America if you build a wall on the border, just because the best part of those riches is already in America—that is, someplace around the corner from here, on Wall Street.