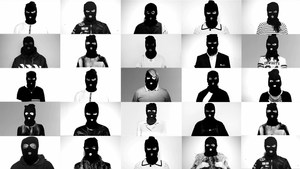 This week in the PEN Poetry Series, PEN America features a poem by Juliana Spahr.

It’s dark often at these times.
Urban though, so a certain version of light too.
It’s hard to predict if it will start on time or how late.
I’m often a little late and it has started. Last night, I could tell from the copters overhead that I was late.
As I walked up, the blocks around it were emptying out.
Parents pulled their children home.
The night herons settled into trees.
That’s the outer ring.
As I got closer, all that was left were the blinking lights of the motorcycles blocking the intersections and the
men and few women in uniforms that mill about the corner, helmets in their hands. They talked among
themselves. Ignored me mainly. One told me how to get around. I did not clarify that I was walking
towards.
You can hear it sometimes. It often has a soundtrack. Sometimes it has drums and brass. Sometimes just joy.
When I am late I am trying to guess its path. Last night, several times I got close to it only to be turned back by
a line of cops.
They let the media through but turned me back.
Then it turned the corner and there it was.
At that moment, I melted my body into it and it embraced me.
Rosy fingered dusk and all that.
Come here, it sang, listen.
And then I was borne along by the waves all night and the whirlpool, the fig tree, and I was the bat, hanging on
patiently.
Aarav came up and hugged me.
Someone grabbed me from behind and I thought it is Artem but later realized it was Berat. So much mask.
I grabbed Charlotte’s hand and held it for a while when things felt dicey.
It felt dicey as they cornered us from two sides and we went down the tight side street, up the hill. Charlotte’s
hand.
It’s like that.
Moving from isolation to the depths of friends.

At first we didn’t mask up. We were poets.
Then slowly one by one we did.
As we got turnt.
As I got turnt I mean.
Sometimes I still don’t mask up. It often feels hubristic.
I keep a bandana in my pocket.
It isn’t super effective. It falls down a lot.
Last night, I tied it around my neck as we walked up the side street hill. I pulled it over my face as I walked past
the line of cops. I noticed Emma there, throwing eggs. I ducked. Two balloons filled with paint flew by.
Visors suddenly yellow.

She said to me, how is your heart?
And I at first worried her question.
Then I realized she meant my heart and how it was turnt.
It is good, I said, I am opening it; I am expanding it.
And I meant it.
I love you I texted Felix.
Lub u!!!!!! I texted Haruto.
Texting Isabella and Jackson, I love you guys.
I miss you.
I texted love you some forty-three times in the last few years.
I texted <3 some thirty-three times.
Lub u, eighteen times.
Miss you, thirty-eight.

She said your feed is all riots, plants, picnics, and poets.
It was an accusation.
She was noticing that I had got turnt.
And I said, my son, my son is in my feed too.
I didn’t bother to argue the riot with her.

I was at the poetry reading and Mia didn’t go. She was supposed to read too but she didn’t. She said she
wanted to see what happens. Then she texts I love you and I know then that Trader Joe’s has been
looted. All the wines out in the street.
Such sweet elixir, FOMO.
Then the rest of that night.
We quickly say good-byes after the reading, refuse the offer of going to drinks, careen from the reading to
our home. One of us on twitter the entire time. Texting too. While we are driving, one of us at home
runs out into the streets, towards the gas. I drive up and two of us get out of the car and I stay in the
car and drive the few blocks home. My son has fallen asleep in the back. I am coughing in the car from
the gas. He sleeps through it. I take him out and carry him up to bed. More texts. I love you, I text.
Come by and get me when you are done.
Later that night, I go out again. Miguel stays home with Minjoon. I go to a fight party; Marxist v. Nihilist. No
one knows which is which. Mohamed, my fighting teacher, fights. I miss it. I love you I text. She texts
back I’m high on being slugged; my eyes are swollen; I lost; I’m turnt.
Standing outside, a woman gets kicked out of the club. The bouncer tosses her out and into us. She is fucked
up. And this feels awful to her. Her arms wildly swinging indicate this awful feeling. It feels awful to us.
Another woman tries to help her and she slugs her. She misses and the woman who she has tried to slug
takes her, calms her down. I hear her saying I love you, I love you over and over. Later I will learn that she
spent the entire night talking the woman down. It’s like that. When turnt, sometimes one needs to be
held.
Still later, I stand on the street, outside my house and watch the t-mobile get looted. A man tries to stop
another man who has his hammer at the ready in front of the window. The man who is attempting to stop
the hammer gets hit in the face with the butt of the hammer. I decide to go to bed. It is 3 am. I text
Nathan and say I love you and I’ll leave the key in the box for you. The march continues on, Nathan
continues on, turns left a block away and then when Nathan texts me back I know the Whole Foods is
looted and they are all drinking champagne, dancing. All of them will get a cold later.
Riot champagne becomes a term among us that winter.
I wasn’t there but I was there too. My germs were there.
I too had that cold.

Is this poem too heroic?
I am sorry.
I worry it is.
Or I know it is.
We are turnt to mere vandals at moments. I’ll admit it.
Every computer in that shop.
Every phone in that one.
Every car in that car lot.
I don’t want it to be heroic but last night I turned the corner and Nor was there with her bike and when I saw
her I said I love you and we walked down the street as each window was cracked. They got turnt.
Eventually we disperse. I jog for a few minutes away and out of the kettle. We joke, circle back to watch
a car burn. Oliver walks by. He is hurrying towards the dispersal. I love you we say to him as he heads
off. The car burns. The fire truck arrives. As I stand there watching it, it is as if everyone I have ever
texted I love you to walks by. I love you we call out to each other.
A group of women walk by the car and stop to take photographs. So much joy they have. They are laughing
with such triumph. Selfies and all. Turnt.

This poem is true. I have texted I love you and its variations over and over.
Sometimes I barely knew you.
But the names are not true.
This is not a coterie poem.
Is it a milieu poem?
Can it be a movement poem?
I took all the names of this poem and never wrote them in.
There is no electronic record of them.
I found a list of the most popular baby names for various countries in 2015, the year in which I am writing this poem. I made a list, one male and one female from each list. Then I alphabetized it. And I put these names in this poem one by one. I got to O.
But Olivia, Saanvi, Santiago, Seoyeon, Sofia, Yui, and Zeynep, I love you too.