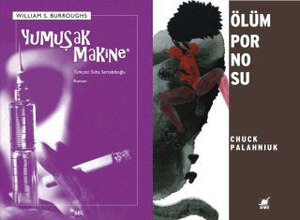 Last year, I reported on the trial of Turkish publisher İrfan Sancı and translator Süha Sertabiboğlu for their January 2011 publication of William S. Burrough’s 1961 novel The Soft Machine (Yumuşak Makine). The ongoing legal action against them received international notice, including in the Guardian, which both reported on the trial and published an editorial by Elif Shafak. After various postponements, the trial is set to continue tomorrow, March 13, 2012, at 9:30 a.m. at the courthouse Çağlayan Adliyesi 2. The publisher (Hasan Basri Çiplak of Ayrinti Publishing) and translator (Funda Uncu) of Snuff by Chuck Palahniuk are also set to appear in court on similar charges. If convicted, all parties face prison terms of six months to three years under Turkish law.

The International Publishers Association issued a statement last October calling for all charges to be dropped, as did PEN International. Nonetheless, oppressive legal action against these publishing professionals continues.

We encourage everyone to protest the trial by writing to: