Treatment for a Story 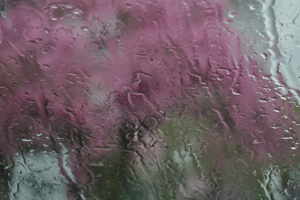 This week in the Guernica/PEN Flash series, we feature a piece by Kathleen Collins. Subscribe to the series and get new flash delivered to your inbox twice a month—no spam or news, just stories.

A ground-floor room in the back, cluttered with trunks, boxes, books, magazines, newspapers, notebooks, and paintings, and smelling of Gauloises, burnt coffee, dirty sheets, couscous and peppers, and a mélange of female scents. A window with bars opens on a courtyard. It’s raining. A taxi pulls up in front. She gets out and runs inside. We wait. He comes out for her bags. The taxi takes off. He carries her suitcases inside. They embrace. He is wearing a maroon turtleneck that sticks to his skin and smells of damp sweat, and a pair of thin, pointed shoes that smell of casual sex (lightly exhaled, like cigarette smoke). He closes the door. It is raining a deluge. He puts her bags down (somewhere). They sit on the bed. The rain pounds away. She is thrilled by the dampness. By the cold and the clutter and the stale masculine swell. To which she adds her sex, her wet hair and an uncertain odor of eau de toilette. Heat rises from a pipe hung loosely between his lips and from intermittent grunts he emits during pauses in their conversation.

As if there were another conversation he was having with himself…Himself. While the rain pounds away. He goes out for food. She curls up in bed. Pulls the dirty sheets over her and starts to doze…Starts to doze until the room pulls her awake, overpowers her with its clutter, its scrawled notebooks and poems and letters to himself…Himself…The odor of his conversations gets under her skin, keeps her awake. As if she did not belong there. He returns. Heat rises from the sautéed pimento and peppers and the steaming couscous he prepares.

Heat rises from the burnt coffee he brings her. Heat rises. The stale masculine smell dominates everything. He lies down beside her. Now she can sleep. Morning. The room is deep and dark.

She goes out for a walk. Soaking up the fresh uncluttered smell that follows a rainy night. She walks and walks. She wets her tongue with the sharp licorice taste of Pernod. She sweetens her stomach with croissants. Chauds. Avec du beurre et de la confiture. She looks for the sun cloistered in some lazy out-of-the-way garden. To fill her nostrils with flowers, warm dirt, wet blades of grass, and give her back the uncertain odor of eau de toilette. Then she returns to the ground-floor room. Where the rain beats down. Where she is overpowered by the casual scent of his thin, pointed shoes. By the scrawled odor of his notes and poems and letters to himself. Himself. Pounding the wet typewriter keys. Himself. Scribbling interminable notes. Himself. Extinguishing his pipe. She stretches out on the dirty sheets. He lights a Gauloise and lies down beside her. (It must be demanding and real, the odor he gives out. It must soak her up.) She takes her tongue and gently licks him, replacing the sharp licorice Pernod with the stale, sweaty taste of his body. Heat rises from his strange grunts. Heat rises. A triumphant commingling makes her spine tingle. Pure happiness. Her back arches. Pure happiness. A shudder overpowers her. She goes light. Pure happiness. A damp underground sleepiness takes over. It is raining in her dreams. The taxi pulls up and lets her out. She rubs her nose against a deep suede vest that smells sour and warm. Heat rises from the tinted neutrality of his gaze. He does not quite embrace her. He is busy scribbling a note. Rain pours down her back. Morning. The room is deep and dark. She goes out for a walk. Soaking up the sunlight. Relieving herself of the clutter. His clutter. She takes a deep breath and loosens her raincoat. She smiles at a stranger. She sips two jus d’orange pressés. Oui. Deux. And rolls the sweet taste around her tongue. Until she cannot go back again.

The rain does not let up. The scribbled notes get under her skin. All the heat is locked inside his strange grunts, his impenetrable conversations with himself. Himself. There is nothing to be gained here. Not even a hot shower.

Kathleen Collins, who died in 1988 at age forty-six, was an African-American playwright, writer, filmmaker, director, and educator from Jersey City. She was the first black woman to produce a feature length film.