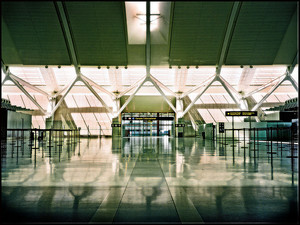 His mother told him. He’d forgotten though. Airports always pour a nice shot. Something about being that close to distance makes bartenders understand suffering. That Thursday he was headed fourteen cities away from anyone he knew and the brown was fortification. He would say things like that to himself, “was fortification.” See his daddy built houses, not real houses but the kind that grown men create in their mind and lock themselves inside. The doctor’s called it bi-polar but his moms just said his father had “some shit with him.” Turned his head into an airport. He was always running away from something, always fourteen cities away from the people that loved him, even if they were in the house with him. His father taught him to crave brown liquor. Lighter fluid for the brain he would say, as if he, the father, thought it would drown out the noise. Half a dozen years later and every time he walks into an airport he thinks about his father. When he stares down a nice long taste of cognac, he almost wishes their were voices in his head he wanted to drown out—wishes the distance he traveled was always with him, and not the way he stole away from things he couldn’t handle.