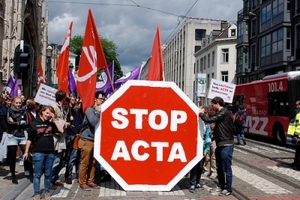 At a recent event at the Public Theater in New York, author Salman Rushdie recalled that when he became the target of an edict in Iran, which called for him to be killed, he approached the Danish government for support. He was told that Denmark feared placing too much pressure on the government of Iran because Denmark didn’t want to jeopardize its large feta cheese exports. In this instance, human rights lost out to feta cheese. This is one small example of the influence of international trade upon free expression.

I just returned from a fascinating conference in Washington, DC that explored the interplay between International Trade and Internet Freedom. Entitled “Can Trade Policies and Agreements Advance Internet Freedom?”, the conference featured speakers from civil society, academia, corporations, and governments at a lovely building at the Elliott School for International Affairs at George Washington University.

PEN entered this exciting conversation after we approved our PEN Declaration on Digital Freedom at the PEN International Congress in Korea in September. The Declaration is a concise statement of PEN’s position on free expression in the digital age, as our caseload of imprisoned and threatened writers continues to grow to include those who have tweeted, blogged, or even accessed an article online.

While it may seem unusual for an organization with a 90-year history of promoting literature to sit arm-to-arm with international traders, the size and scope of both multinational corporations and trade agreements can have an enormous impact upon free expression. Not only does content move across borders on the internet, but so too do technologies that can filter and censor information, or reveal the identity of authors and human rights activists.

Here are three things that I learned at the conference:

1. The free flow of information can promote free expression and nurture industry across borders, but these slam into concerns about privacy.

Our current trade regime originates from the unique development of the global economy. As summarized by Lara Ballard, Special Advisor for Privacy and Technology at the U.S. Department of State, the U.S. itself emerged from a more protectionist trade agenda in the 70s as its economy began to diversify to include services, causing industry and U.S. trade representatives to press for the increased flow of data across borders. Yet Europe, developing along a different route, maintained a concern for privacy that is reflected in various laws throughout the European Union. The free flow of information arguably promotes free expression, yet data mining can undermine its benefits. These competing arguments are represented on the one hand by content providers that wish to maintain strict control over their intellectual property, such as the music industry, and corporations that thrive on data collected from online users, such as Google.

2. Trade agreements that have an impact upon free expression and Internet freedom often lack transparency and civil society input during the negotiation process.

Certain trade agreements, such as those administered by the World Trade Organization, involve complex multilateral negotiations while others are merely negotiations between two states. Yet the details of these agreements are often negotiated behind closed doors, with minimal civil society input. For example, attorney Hillary Brill, senior Global Policy Counsel at eBay, lamented that she was forced to consider how the pending Trans-Pacific Partnership might affect her company—but she only had access to a draft of the partnership that was 18 months old. Similarly, the 2011 Anti-counterfeiting Trade Agreement (ACTA) met significant opposition once civil society groups learned of its punitive provisions for copyright violations after it had already been signed by eight countries.

3. Countries may use censorship as a pretext to exclude global corporations and promote the growth of domestic companies, possibly in violation of free trade agreements.

Andrew McLaughlin, former Deputy Chief Technology Officer at the Whitehouse and current Entrepreneur-in-Residence at betaworks, painted a scathing portrait of China’s practice of banning or censoring companies such as Twitter while nurturing homegrown internet competitors like Sina Weibo. The reason for excluding these companies is ostensibly censorship—under a theory that the content violates public order or morality—yet there may be a deliberate effort by China to promote home-grown companies at the expense of global corporations.

The U.S. formally requested a clarification of China’s actions under a WTO procedure but has not received a response, and no other country has been bold enough to challenge China on the matter.

Of course, a lot more happened in the day-long conference than can be squeezed into a blog post. One free-flowing panel, which included voices from Human Rights Watch, the Electronic Frontier Foundation, eBay, and the State Department, contained so much information that it became impossible for me to type fast enough to write everything down. I emerged from the conversation with the feeling that these various stakeholders genuinely care about internet freedom, but they feel constrained by a lack of transparency and a driving concern to operate their businesses efficiently. At the same time, there is still a vital need for civil society input to ensure that economic arguments that promote Internet Freedom don’t ignore basic human rights concerns.

As more and more authors express themselves through digital media, and journalists and activists access the Internet, these issues will increasingly affect PEN. Our hope is that our Declaration on Digital Freedom will serve as an important step in participating in and shaping the debates.