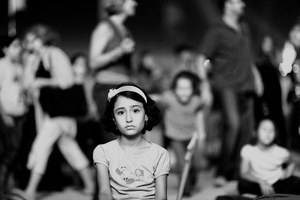 I am a man
and you are not.
I will not bark.
And even so,
what good does
barking do?
I, at least, am a man,
I whisper softly in your ear.
I, at least,
am quite a man,
I utter softly
in your year.
You bit some pillow
like a man.
I whisper softly
in your ear
that I am at least
nearly all man.
Why manhood rules
and why you don’t,
I won’t know why until
you whisper softly
in my ear. You barked
back softly in my ear.
You barked that I
am at length man.
I barked back that
you’re quite a man.
I whispered loudly
like a dog
that you are now
a man. I will not
kill a dog that barks
at me.

I read the paper with my legs folded primly under my dress.
You unraveled your belt and stared at me.
I sucked your blood sausage until it spat.
You burned the temples to the ground.
I noticed you singing toneless hymns.
You invited me to sit beside you as you mouthed
printed words into sounds. I was in bloody A couture for Jewesses.
You typed your hands down my spine.
I played prosecution, defense, and judge at my trial.
You typed something backward and you saw my scared animal face.
I won the trial but left the kitchen.
You made every inch of your kingdom into the bedchamber.
I left and left but never left.

How might it feel to be forced to drink molten gold?
The hardening from the inside would kill you almost instantly
When the gold was poured
over his head he started to appear quite small really.
His protests and violence were silenced and he was no longer a threat
by any means.
How might it feel to be flayed alive?
The human body is soft and animal.
It would take hours and hours to go into shock
because it’s really just the impact of a paper cut
repeated
minus the sidelong commentary of a chatty executioner.
At some point you’re not even naked anymore—
just wearing a red suit to a short party.

I imagine there are still likely to be scores of UF professors who will sidestep getting involved in any form of public testimony, just b/c the politics, risk, intimidation factors here are so high. The damage may already be done in FL. #academicfreedom https://www.nytimes.com/2022/01/21/us/florida-professors-free-speech.html

THE SENTENCES THAT CREATE US: Crafting a Writer’s Life in Prison just launched on @HaymarketBooks with @PENAmerica! A comprehensive resource told through compelling first-person essays by @dwaynebetts @MitchSJackson + @Piper, among many others. http://pen.org/sentencesthatcreateus