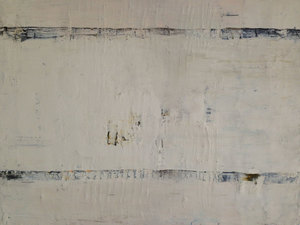 Your head is an apple and you are a bird feeling squashed in
blue. Your head is a window you must face alone, rippling: its
rigidity is dictatorial. But what is the root? The meaning, core,
trunk? You’re a play of light, sweat, ruby, rubber, bagel, lemon,

used car, boiling springs, all I need, waiting for someone to bump
into you. Is that me feeling your decibels, slow pale eardrum
in the middle of your picture, the pinky-purple mille-fleur nouns
of your knees? Which side of this are you? Bleach of me swells

like a tuber. Pressing against limpet golf-ball blanks, you could
be wheat, hobbling up, air-cone, feeling what it’s like to feel rainy
borders that fizzle—hold on a minute now, you’re just rumors,
plural oyster greys, granular tang to be entered transparently

on good days, right? Where is the blind change of color? What
pinch of circle or tassel, giddy and worse? That’s you, not a baby,
but a heart open like fences lank in dunes, flapping, full with milks
of human kindness, turgid, rainbow, bullish, giant, fruitful, aperture.

Bends in the Middle

Since I go up to you like Tennessee
or depression in fern. Am I
pudding in scullery?
I fill you like feeling, which has a system.
I’m not far or near, the way words
pile up in dictionaries. I touch
your sensible drowning cloth.
I will go to it, my parachute, or throat.
Over here, this is where I come in,
stretching over rain. But instead
I arise, little bristle,
bristle at my normal window,
green, blue or blue-green.

I stretch under rhubarb cloud, limpid as cheesecake. I’m polyester
dress on dune, fuzz off verb, disappearing scent of cone. I dip my face
into your glare, I’m dipping lightly—can’t you see me? I’m feeling
there. All my senses perceive snow snaps on trees, roosters pour light

on floors. And where’s my early train, my foothill? Here it is, my dry milk,
my water glass, sluggish whispers in halls, various years that breezes enter
like a house. It’s you. Your eyes are alabaster jars, my love, glaciers lugged
across quail-grey, stiff the way timber dissolves into November. Sometimes

you are snow dragging an obstacle through sleep. Do you hear the rumbling
of grasshoppers? They are singed-leek, untidy on beet-tops. They are music
of grass, fugitive boxes. They’re the shattering fabric, silt in river, splashing
galoshes, our conversations on gluey roads, like thirsty paper, shaggy hinge.