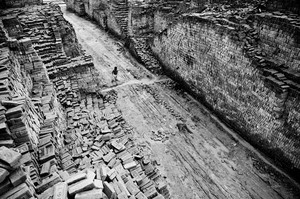 This week in the PEN Poetry Series, guest editor Robert Fernandez features three poems by Roberto Tejada. About Tejada’s work, Fernandez writes: “These three poems of Roberto Tejada’s shiver with anxiety and awareness, violence and exuberance, self-reflexivity and the sublime; they are shot through with the ‘hard kernel in nightmares’ and a ‘crystal nerve.’ Tejada foregrounds and adjoins a variety of domains: the household, the media, markets, law, the government, the natural world, the cosmos. Each is held up to interrogation; each casts light on the other and each appears unfamiliar as a consequence. These poems move to ‘register an inventory of experience I / deform…’ And in so doing Tejada keeps us questioning and seeing with fresh urgency.”

From the viewpoint of method, even this pantomime futility appearing as choice, is the
incremental mind to right the shapeless succession.

Same old ability to speak as ever, for whom acquisitive I exist alone in the privilege of
my household, an image of it on the television.

Photograph, two rooms transposed: in one there’s a watchman to guard the threshold; at
the far end of the other, wakefulness in audience.

Quiet pleasure in that blush of skin: modest avowal of what a word can confirm,
moreover when it activates, encourages.

Disdain and envy of the idols so submitting to my satisfaction as to favor me the mortar
and method to raise a causeway out of estrangement.

Hard kernel in nightmares to convince it occurred at the quarry, our intent to find failing
even now as shallow graves still map the desert.

Homecoming for that underground encouragement whose purpose it was to threaten with
a counter-calculus of maul, blaze and smothering ash.

If in the brickyard, if in the chromium disclosure copyright, if in my signature all demise;
draw closer, triangle, bylaw, some protein.

Even with slurred tongue and cracked teeth I discern a benign country beyond for me to
confer there my night custody and coat of arms.

Same unfounded sensation in sight, same tenuous advances from my departure point
ether in its sinuous release to anesthetize the galaxy.

A calendar that tenders all authority to this: cloud forest encouraging descent into the
grasslands, and smoke throughout the length of time.

The sunlight concern was with fraught amalgams of attributes; dislocated birthplace,
weightless silver—for all the accounting, exuberance.

Three-times kindled foundry torrents of liquid alloys that cool by cascade into the modest
pills you ingest when the life story obsolesces.

Skills for amazement in this vicinity adjoined to the condition of those who—chain,
splinter, switchback—would alter the object of finality.

Consistency to defy the pitfalls of persistence, such outpouring—glaze, metal, foam—as
to compromise my behavior in the tablet era.

A new form for spatial experience afforded by throngs, readied for the fusillade, poised to
astonish, eventual phosphorous defiant of touch.

Inquiry of restraint, night places of dust-settled abandon—each quiet removal on the edge
of inching cliff, its crystal nerve, to splinter.

In my homecoming was the future moving to register an inventory of experience I
deform, even as I deride what confines me to severed circumstance.

Was it already lost, always—first temper known to appear only in escape or distraction—
what if long buried even as a halfhearted kindness?