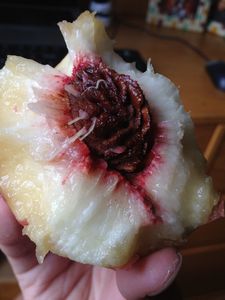 Today in the PEN Poetry Series, guest editor Shane McCrae features three poems by Montreux Rotholtz. About Rotholtz’s work McCrae writes: “Montreux Rotholtz surprises me early and often. And often do I return to the sounds, and the images, and the ideas that initially surprised me, which is how I know the surprises are more than sudden revelations in formerly empty places—they are instead instances of suddenness that reveal the places in which they occur. Oh, that’s awkward—but dig the concluding lines of ‘Summit’: ‘ your breast     like / a peeled     tangerine.’ Yep—exactly that, and just like that, breasts and tangerines are reborn.”

For long I have been a people friend. Just once
have I been a rictus. I’m youthful and up for it,
up for the dance where the hips go so and so,
just think of me as a pillar of light or a pillar
where the light is resting.

But I’m a dweller,
have yet to fully obtain a conquest
like a smashed stone fruit, our meeting was
disgusting and all take.

The halls of weather. The visits
I meant nothing by. Some pigeons bidding

a crenelated streak, five in the base,
the fog cooing

and a wet second kind
of deoxygenated air, leathered
and perilous. I’d an extra sense then.

I apologized for having been in Russia

—soap still in his hair like the foam
at the top of a battle.