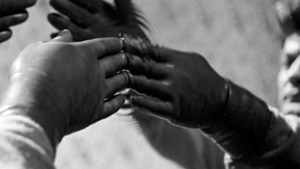 It had been decided in advance.
It was October, so the black birds
flew across the light blue sky.

It was being decided.
The sky rang and rang.
Speculation, spinning like a coin.

It had been decided. A conversation
at the last table in the restaurant,
so it felt intimate and warm.

It was decided. Last month’s receipts.
The sky opened and swallowed a girl.
It had been decided in advance,

although I had decided nothing.
A handful of birds opened
like speculation out of the tree.

It had been decided. The leftovers
of last month, quiet in a corner.
It rang out and it was decided.

It had been eerie. I danced around
and around him and liked it.
Spinning like a coin. It was decided.

It was decided. At the last table,
speculation rose like thought bubbles,
permission to be intimate and warm.

I woke up and drank a glass of water.
Like speculation out of a tree,
it had been decided in advance.

There Wasn’t a Song