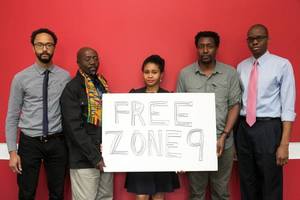 In disturbing news this week, three Ethiopian journalists and six bloggers from the online activist group Zone9 are facing terrorism charges in Addis Adaba. Until last week, he nine had been held since April without charge. Join Pen in demanding the emancipation of the bloggers by posting an image of yourself on Facebook holding a “Free Zone 9” sign, or Tweet with the hashtag #freezone9bloggers.

Prospects are dimming for the passage of the USA FREEDOM Act in the Senate, according to Politico. The Act is the best hope we have at present for reforming some of the NSA’s mass surveillance practices—although the bill’s provisions were weakened in passing the House—and many anti-surveillance advocates are pressing the Senate to strengthen the bill before passage. If the Senate fails to pass the bill within the next few weeks, NSA reformers may have a long wait until they can try again, certainly not before this year’s midterm elections, and possibly not until 2015.

In the meantime, the UN High Commissioner for Human Rights has come out swinging on the protection of privacy rights in the era of pervasive mass surveillance. The High Commissioner’s office released a report on “The right to privacy in the digital age” this week that includes several powerful findings, including:

PEN American Center joined other organizations last week in securing the release of Pulitzer Prize-winning journalist Jose Antonio Vargas, who was detained in southern Texas on Tuesday and threatened with deportation.  Vargas, an undocumented immigrant and prominent reform activist, was in McAllen, Texas to raise the cases of thousands of immigrant children who have been detained in deplorable conditions by U.S. Border Patrol when he was stopped at the airport. Vargas was released later in the day after the NGO community rallied to his defense. Notch up one for the good guys.

Unfortunately the authorities in Myanmar are not yet as forthcoming. Several dozen journalists are facing prosecution for their involvement in, or reporting on, a Yangon demonstration against the recent arrest of fellow journalists on spurious charges of disclosing state secrets.

Finally, another case of corporate-government skullduggery ended this week as the Haitian government forced internet provider Digicel to remove its block on VoIP services. The block, which affected services such as Skype, magicJack, and Google+, was allegedly a dirty deal between the government and carrier to bolster revenues.