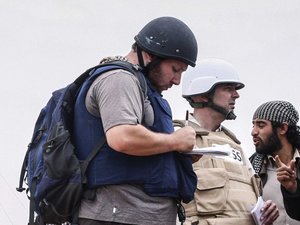 In a moving eulogy for murdered freelance journalist Steven Sotlof, New York Times Columist Nicholas Kristoff reminds reader that there are still journalists willing to push back against the “trivialization of news, a drift toward celebrity, scandal and salaciousness.” Kristoff adds that “Today there are Steven Sotloffs covering war in Ukraine, Ebola in Liberia, malnutrition in India—and also covering unemployment and crime in American cities.”

More troubling news out of China this week, where imprisoned PEN member Ilham Tohti reported being shackled in leg irons by prison authorities. The prominent Uyghur economist and activist is being held in a detention center in Urumqi, Xinjiang and is set for a pre-trial hearing as soon as September 7 on charges of “inciting separatism.” We’ll have updates on the hearing this week.

Attorney General Eric Holder and Director of National Intelligence James Clapper released a letter this week backing a version of the surveillance reform bill introduced by Senate Judiciary Committee Chairman Patrick Leahy. In a joint letter to the senator, Clapper and Holder describe the bill as a “reasonable compromise that enhances privacy and civil liberties and increases transparency.” Leahy’s version of the bill is an improvement over the watered-down version sent to the Senate by the House. But can it actually pass the Senate?

The annual Internet Governance Forum (IGF) kicks off this week in Istanbul, a fitting location considering the trial of 29 Izmir Twitter users who face three years in jail for posting anti-government remarks during the Gezi demonstrations. Active in Turkey for many years, PEN is preparing a new report on digital freedoms in the country, following on from our Gezi Park report.