The Tragic Reality of Human Existence 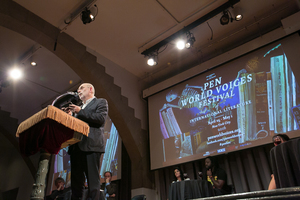 This piece was read by Boris Akunin at the opening night of the 2016 PEN World Voices Festival, where authors shared their philosophical inquiries into society’s need for mind-altering drugs and the all-too-human desire to escape reality.

I believe the reason why some people (roughly three percent of the world population) ruin their lives by taking drugs is exactly the same reason why the overwhelming majority of humans ruin their lives doing jobs they do not like, watching stupid TV shows, pretending they are someone they are not—in short, wasting their precious time on this Earth in a million other senseless ways.

The tragic reality of human existence is that only a very few individuals are lucky enough to find the purpose for which they were born. All the rest have to do with some sort of palliative. At best, they find solace in their children, hoping that maybe the next generation will do something more sensible with their lives. In one of the worst possible scenarios, they find oblivion in drugs.

The very first novel that I wrote 20 years ago dealt with this riddle: how to find one’s real purpose, one’s unique road that would make life full of meaning and fascination.

Let me read an excerpt from that book, where a kindly, old matriarch, Lady Astair, explains what I mean:

“My poor boy [she says to the protagonist Fandorin], I know how lonely you must be. For forty years I have been helping poor boys like you escape their loneliness and find their path.”

“Find their path, my lady?” Fandorin did not quite follow.

“Oh, yes,” said lady Astair, becoming animated as she quite clearly mounted her pet hobbyhorse. “Finding one’s own path is the most important thing for anyone. I am profoundly convinced that every individual possesses a unique talent, everyone is endowed with a divine gift. The tragedy of mankind is that we do not seek to discover this gift in the child and nurture it—we do not know how. A genius is a rare event among us, even a miracle, but what is a genius? It is simply a person who has been lucky. Fate has decreed that the circumstances of life themselves nudge the individual towards the correct choice of path. The classical example is Mozart. He was born into the family of a musician and from an early age he found himself in an environment that nurtured ideally the talent with which nature had endowed him. But just try to imagine, my dear sir, that Wolfgang Amadeus was born into the family of a peasant. He would have become a crude rustic herdsman, amusing his cows by the magic trilling of his reed flute. If he had been born into the family of a rough military man, he would have become a mediocre officer with a love of military marches. Believe me, young man, within every child, every single one without exception, there lies a hidden treasure, one simply needs to know how to reach that treasure! There is a very nice North American writer by the name of Mark Twain. I suggested to him the idea for a story, in which people are judged not according to their actual achievements, but according to the potential and the talent with which nature has endowed them. And then it will turn out that the very greatest general of all time was some unknown tailor who never served in the army, and the very greatest artist of all never held a brush in his hand, because he worked as a cobbler all his life. The basis of my system of education is to ensure that the great general is certain to find his way into the army and the great artist will be provided with paints in good time. My teachers patiently and persistently probe the mental constitution of each of their wards, searching in them for the spark of God, and in nine cases out of ten they find it!”

The nice old lady from the novel firmly believes that each human born on this planet is precious and unique because each of us potentially can do something better than anyone else on Earth, that each of us, literally every single individual, is a potential genius. The true purpose of life is to search for this unique vocation, while the inability to achieve this aim, or what is worse—not even attempting to do it—is the source of personal misery and social conflict.

Then the novel goes on to describe how lady Astair’s system of education, the pedagogical method of unearthing the uniqueness of every child, works. I won’t go into that now, but I must say that I entirely agree with this theory that seems idealistic only at first sight. Searching for your unique talent, for something you do better than anyone else—that’s what makes human existence meaningful and real.

What we have to understand about drug addiction, I think, is that it is just a small part of a much bigger problem, one particular, albeit malignant and radical, case of existential escapism from the depressing fact that most of us age and die without having really lived. While this main problem of human existence remains unsolved, there will always be people wanting to escape from this emptiness into drugs—and of course there will always be criminals willing to profit from this need.

ICYMI: Virginia Beach City Public Schools removed Toni Morrison’s The Bluest Eye and others from its libraries. We wrote to the district, along with @PENamerica @ncte @authorsguild & @CBLDF, calling on them to return these books to shelves.
https://ncac.org/news/virginia-beach-toni-morrison-lawn-boy-banned

"Is it possible that bad photos showed us something we wanted or needed to see?" Check out @PamelaPaulNYT's ode to the bygone days of blurry, poorly lit images before joining us for a #PENOutLoud event w/ Pamela Paul TOMORROW: https://bit.ly/3Aai2Wf. https://bit.ly/3be552A