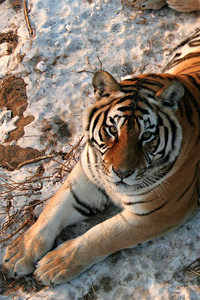 This week, in place of our regular Guernica/PEN Flash series, we’re featuring two stories from Flash Fiction International, published earlier this year by W.W. Norton. This piece comes to us from Afghanistan. Read an interview with one of the anthology editors, Christopher Merrill, here.

It was market day. I had loaded a dozen sacks of potatoes onto a truck and we were taking them to Kunduz. It had been a long time since I’d been to the bazaar. Traveling the vast Shorao desert, the truck was raising clouds of dust. The desert was so flat that it was hard to believe we were on top of a mountain, and I saw no other vehicles for an hour.

As we descended to Kunduz some armed men in long brown velvet shirts signaled us to stop at a checkpoint. One of them, with his long hair tied back with a handkerchief, came forward. He hovered around the truck for a while, then stopped and wiped his sweaty forehead with a dirty sleeve.

“Who owns these goods?” he demanded, squinting through dusty eyelashes.

I got down and followed him to an old stronghold where a stream flowed through a courtyard. Silk rugs were spread out beneath large poplar trees. Five men sitting on velvet mattresses were playing dice on a checkered cloth.

Ten or fifteen brown-shirted gunmen sat apart from the game. One of them was puffing hard on a hashish cigarette. “Pull harder, harder!” his companions encouraged him. He puffed again, coughed six or seven times, waved his hands to thank them, then handed it over.

The long-haired gunman was kneeling on the rug now, watching the game.

“You have a lucky hand,” he said when one of the players reached in to collect his winnings on the cloth. The other gunmen on the bank of the stream turned their heads and repeated his words.

“Hand it out among the boys,” the winner said and threw two bundles of 10,000-Afghani notes toward the long-haired gunman. Then, when he saw me, he said, “Qaleech! Who is that?”

“What are you carrying?”

“Some potatoes,” I replied.

“Then you have to pay the tax.”

“What tax? I grew these in my own field.”

“Qaleech, this man seems a stranger. Do you think he is a spy?”

“By God, I haven’t seen him before,” Qaleech said, fixing his gaze on me.

I was wondering where I had seen the commander before. His long hair, the beautiful white face, the red lips, the eyes skillfully darkened with kohl, and the soft feminine voice—all were quite familiar to me.

Then I remembered. This was Feroz. His thin moustache, the few hairs of beard on his chin, the long shirt, and the ammunition belt around his waist had changed him entirely.

Feroz had been Haji Murad Bai’s keeper and dancing boy. It had been a long time since I’d seen him. Years ago, Haji Murad would invite us to his house, where Feroz would appear wearing ankle-bells, a woman’s costume, powder on his cheeks, lipstick on his lips, henna on his hands, eyes darkened with kohl, and he would dance for us.

Five years ago, rumors spread that Feroz had shot Murad Bai dead and eloped with his younger wife with whom he was having an affair. Murad had won his younger wife, the same age as his daughter, in a partridge-fighting competition. I had heard rumors that Feroz then became a commander of a militant organization, but I didn’t know any details.

“I am asking who you are and for whom you are spying?” Feroz’s voice brought me out of my thoughts.

“I am Qadoos,” I said. “a friend of Murad Bai. Feroz, don’t you recognize . . . ” A hard blow hit my shoulder before I could finish. Suddenly I was flat on the ground, and then I was being beaten and kicked and hit with rifle butts.

After a few minutes the long-haired gunman pulled me up by my hair to face Feroz but I couldn’t. The pain was too fierce. Feroz looked at me furiously and chewed his words to make his voice hoarse.

Mohibullah Zegham was born in 1973 in Kabul, Afghanistan. He first wrote fiction in 2005 when he was working as a physician in Kajaki, a war-torn district of Helmand province in the south. A year later, his first collection of short stories was published by the PEN society of Afghanistan. He now has ten books.

Rashid Khattak was born and raised in the Karak district of Pakistan and took his master’s degree in journalism from the University of Peshawar. He writes in Pashto, Urdu, and English, and translates from each to the others. He has worked with many media organizations.