The Revolt of the Peasant Girls 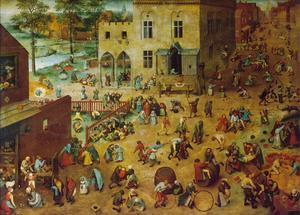 This week in the PEN Poetry Series, PEN America features a poem by Anne Boyer.

The Revolt of the Peasant Girls

Our lights had been dimmed to lavender wanting things, hugging Care Bears, hoping for Stalingrad or Rick Springfield. In the earliest July of the decade, immediately preceding a series of multi-township Pioneer Days, we received our first visions.

These came in dreams:

Though the fathers and brothers and potential husbands who fought us and fell are entombed and their monuments decorated with cockscomb and digitalis, we wait for the earth to open and spit out our bodies to the statisticians.

Now we are like any heroes: forgotten. The French braids and beaded cornrows are still attached to our skulls, but our aquamarine-and-heart stud earrings fallen from our pierced ears to the earth. If we were going to be resurrected, it would be in our decayed Kangas, crawling out from under the mounds of Playtex and Wet-n-Wild they bulldozed over us.

We were small, but not as small as you think.

Though we would have preferred a pony, the revolutionary subject was a sow. The sow explained black magic, class struggle, seasonality, theories of gender, the agricultural optic. When the sow showed up, we were ten.

Following its instruction when we slopped it, we shaped a shirt-hanger into a modem. Mom had told us all things would smell of sow after it was brought to the farm, even the Alco blouses we were dressed in. Mom said once you had a sow in the econo-scape the battle was for granted, and she should know.

What we found when we transmitted the conditions of girlhood along these lines was the insolvency of emerging versions. It was no one’s fault: we were of calico heredity and as servants to the world’s appetites we were subject to the complex’s pastoral inferno.

To the world we arrived in there were a few among us as prescient as the sow. We made everyone know the shame of subsistence that was our shame but not entirely. We grew against the smallest profit. How everyone had to know.

This was the problem with a sow around, Mom said that when you left the site where the sod broke you could not hide its truth. No one milks a pig. You only slaughter it. The sow’s intelligence is unalien but still.

The sow’s intelligence is unalien, but still there were a number of lies told along the dirt roads: one of them was innocence.

We were told that we would possess no complexity that wasn’t the parsing out of potential meats. These were the common complaints of our bioregion: in short, note the diagram.

We were basic. We’d earned archery badges. We played piano. We threw I-Ching. The townspeople were little Pharisees. We saw the facts under their Izod vestments.

Who will ever forget what we did at the railroad interchange, the alleyway, the grain elevator, main street, or on one of two hills?

The first hill was named after a conqueror: the second after the conquered. This was a site on the small patch of the conquistador’s chain mill. This was a rock drenched with indigenous blood. Later in both places generations of fleeing evacuees carved these numbers:

Generations of evacuees carved out these numbers, but this was a museum in which we the peasant girls had long planned to live: the new mall. We went long risk on belly trenches beside the aquamarine fountain. There were defaults among shop rotations where we could realize. Either in the mall or seventeen miles apart, approximately, we could stand without family on the two hills and signal victory over the sign-light of Dairy Queen.

We were angular with battle but maintained angelic cheeks. There was never so much ovality as our faces, in the glint of field fire, packing numchuks, aluminum bats, and leaf-rakes. We had not yet met any other soldiers and so war craft had foundational allure.

What was the rhythm of total destruction? Did it sound like Olivia Newton John? No one had yet spoken a word about strategy.

No one had yet spoken a word about strategy but Mom. Sometimes, at nightfall, the rabbit ears jittered and the modem sent us a communiqué on sorghum.

We set to work on our tactical gear. One suit was made of pheasant feathers. Another was made of frog legs and twine. A third, from the scales of walleyes for when we must march inside the reservoir. A fourth, from the skins of dads. A fifth involved the downy hair of varsity athletes. The sixth involved the canvas pants of the man who worked at Casey’s General Store. The seventh was woven from iris leaves after June. The eighth was a coat of trash-fire. The ninth was a dress made of hymns. The tenth suit of camouflage was asphalt and power lines. The eleventh suit, they forbid from 4H.

We met in the windbreaks, and in little hollows at their roots we pooled our weaponry. Before the battle started, Tina showed us the bottle of Jack she’d taken from her parents’ rec room bar.  We were the peasant girls, and thus an army, and though no one got drunk enough among the Russian Olives, we felt, in our throats, a war song.

It was imperceptible, except as insects, to the harvest crews.

We would lay in also, at the drainage ditches and irrigation pipes and levies, waiting for the future. At first we thought all bloodshed would be pastel.

Jenny was the first to fall, with her blond hair spiked in front, her yellow shaker-knit sweater blooming with blood and intestines, the militia from Bennington shooting their rifles from the militarized column of Ford F150s.

We’d presented a list of demands written in a pen with four-colored ink:

1. to release every animal
2. erasure
3. the wilderness
4. to always remain girls

The president, upon hearing that we had taken up arms, sent us coloring books. The sheriffs’ deputies, upon hearing we were girls, tried to rape us. The others just killed us: but to tell that story in plural is to deny the intimacy of facts.

The Intimacy of the Facts:  DEAR FUTURE GIRLS,