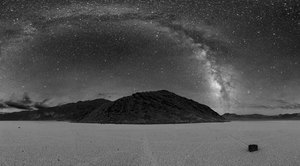 This week in the Guernica/PEN Flash series, we feature a piece by Natalie Diaz. Subscribe to the series and get new flash delivered to your inbox twice a month—no spam or news, just stories.

I have imagined the night when Einstein turned to astrophysicist Abraham Pais and asked, Do you really think the moon only exists when you are looking at it? Pais immediately looked up into the corner of that blue sky, locating the satellite, holding with his eyes and mind that grand hole of white light turning the night green at its edges. On that night, it hung like a bone above them as they walked along carrying their big brains. It’s clear to me, too, that when Pais looked up at it, the moon grew fatter, rounder, and the grey maria on its surface pulsed and flickered into focus in a way that seemed new, the way a moon seems new each time we catch it in our gaze.

Quantum theory: My brother and his suffering do not exist until I write it down, until I make it understandable through my own images of suffering.

Or, quantum theory: If I do not look him in the eye, if I do not write him down, write myself down, then maybe his suffering does not exist, or he is maybe-suffering, or he is both not suffering and suffering.

Maybe it is this simple: We have to look at the moon, acknowledge the moon so we know we are here beneath it, deserving of its light, deserving of the oceans it pulls, the lovers we reach for, the smooth spin it gives our earth.

Maybe poems are hypotheses in the quantum theory of suffering.

I both believe in and doubt the quantum theory of suffering—whether the suffering of my brother, or the men on the streets in a mess of cardboard and newspaper, or the moon as it becomes less and less night after night only to rebuild itself and be torn down again.

It is tenderness even for myself. Quantum theory is selfish—I quantify my own humanity by acknowledging his. If he is still my brother, riddled and wracked as he might be, then I must still be a sister. There is hope in that.

Einstein’s question: Do you really think the moon only exists when you are looking at it?

Some nights, when the drugs have burned him down in a certain way, my brother thinks the moon is chasing him, hunting him. On those nights, he goes home to my mother and my mother calls me while he is outside running circles around her house trying to escape the moon. He hides beneath the porch, in the bed of my dad’s old work truck, in the shed, beneath the clothes on the line. On these nights, quantum theory is mostly wrong, and my brother is most right and most like Einstein, and Einstein is most like a poet because he knew this: the moon, like suffering, is there, it is always there.

My job, while it is not always easy, is simple: Look at it.