The PEN Ten with Warren Adler 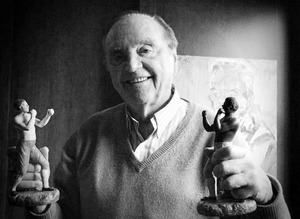 When did being a writer begin to inform your sense of identity?
As a teenager I knew that was the life and career I wanted. I started writing at the age of 15.

Whose work would you like to steal without attribution or consequences?
None. My passion for originality forecloses on such a thought.

Where is your favorite place to write?
In my study. I have always had a room dedicated to my work.

Obsessions are influences—what are yours?
My obsession is to get it right, plot, characters, atmosphere, logic. I never go to sleep without figuring out what I will write tomorrow.

What’s the most daring thing you’ve ever put into words?
The sex scenes of my early novels when it was not generally approved. Looking back what I wrote was actually mild for today’s reader.

What is the responsibility of the writer?
To tell the truth through stories and provide insight to readers so that they better understand the world around as seen through the author’s eyes and to write the kind of books that excite the reader to the notion of “what happens next.”

Where is the line between observation and surveillance?
Observation is essential to navigating through the perils inherent in life. It is a double-edged sword. While I was in the Army I stood guard duty to protect my fellow soldiers from an outside enemy. But how does a guard protect from an enemy who is inside the compound. I suppose it is a question of balance and good will. I do understand the dangers of overdoing it. As in everything, the question is: How much is too much?

What book would you send to the leader of a government that imprisons writers?
The constitution of the United States, but I doubt if he or she would read it.