The PEN Ten with Richard Nash 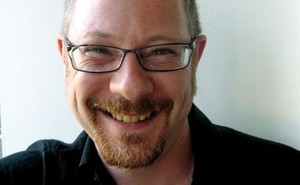 Although I barely think of myself as a writer any more, it was indeed part of my early teen identity. I was in boarding from the age of 12, so letters were my primary mode of communication to the outside world. And I got attention for my writing, which was like crack to me. Partly, it was true recognition in an environment in which I felt largely a freak; partially a way to no longer in fact be a real freak. I could be compelling on the page in ways I couldn’t be in person.

Theft and attribution and such are topics of much interest to me. I like shamelessly standing atop the shoulders of others; my real work is to channel others, so it would be boring to me to present it in some unattributed fashion.

I’m a wimp. Or maybe I just hate being caught.

Probably telling editors they’re not really very good at selecting what should be published.

To not be boring.

Hasn’t fallen out of fashion with me. But I do believe in the disciplined and humble public intellectual, the one who challenges herself to learn about the topic whereon she is to opine. The collective purpose of writers is to be the best readers in the world.

The most successful piece of writing I ever wrote was a letter to a refugee explaining how the mail helps to promote world peace. This was in 1986, when I was 15. It was a UNESCO-sponsored competition. I reread it recently and was a little mortified by how sentimental it was. Yet really, it’s exactly what I should have written, had I it to do over. I’d beg the imprisoned writer to try to remember her teenaged self. The intensity, the outrage, the sentiment, the naïveté, the resentment, the joy.

Just that poem of Shelley’s: “Ozymandias“:

I met a traveller from an antique land,
Who said—“Two vast and trunkless legs of stone
Stand in the desert. . . . Near them, on the sand,|
Half sunk a shattered visage lies, whose frown,
And wrinkled lip, and sneer of cold command,
Tell that its sculptor well those passions read
Which yet survive, stamped on these lifeless things,
The hand that mocked them, and the heart that fed;
And on the pedestal, these words appear:
My name is Ozymandias, King of Kings;
Look on my Works, ye Mighty, and despair!
Nothing beside remains. Round the decay
Of that colossal Wreck, boundless and bare
The lone and level sands stretch far away.”

Join Richard Nash in the fight to advance free expression. Become a Member of PEN today.