The PEN Ten with Nathan Deuel 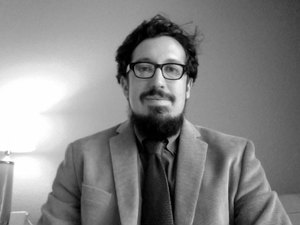 The PEN Ten is PEN America’s biweekly interview series curated by Lauren Cerand. This week Lauren talks to Nathan Deuel, author of the essay collection, Friday Was the Bomb, which is also his first book. A current resident of Los Angeles, he lived in the Middle East for five years. Deuel will be in New York this week, on June 25th as part of Guerilla Lit at Jimmy’s No 43, and June 26th at WORD in Brooklyn.

I was so miserable at Rolling Stone – despite great colleagues and a legendary product – because of how far-fetched it seemed that I’d ever write again. Then we moved to Saudi Arabia, and it was with words and stories that my wife and I sought to understand a deeply unfamiliar place.

I would pretty much steal Nick Flynn’s deal wholesale. Not just the life he’s lived or the elegant way he’s settled – wife and kid, great career – but the rigorous style with which he organizes his books. The Reenactments in particular – his book about having DeNiro shoot a movie about a book he wrote about his dad – is a master class in thoughtfulness, ambition, and allowing life to become organized on the page in ways more profound than I thought possible. Those chapters! That research! Lovely. Also: Rebecca West; I’d happily be her.

I love a noisy cafe – with no whiff of judgment if I park for three hours. I had the perfect place in Beirut: Cafe Younes, which was a kind of Tattoine Cafe of arty college kids, grizzled philosophers, Syrian refugees, and battle-hardened NGO workers. I could work there the rest of my life.

I was detained by Scotland Yard last time I entered the UK. They wanted to hear all about my time in Yemen, and I told them, and they gave me a couple bottles of water and told me which kind of beer to order in Edinburgh.

One of my favorites things to do is Sunday Reading, a regular New Inquiry feature, in which contributors recommend things to read. My list is meant to be a kind of prose poem built from quotes, and in reality, it’s a sausage made from a week of reading about Lebanon (my old home), Los Angeles (my new home), and homelessness (which is a current fascination.)

The dedication to my new book, Friday Was the Bomb, in which I attempt properly and in perpetuity to thank my war correspondent wife for quitting what she born to do, and to come home.

To take the chaos of the lives we actually live and put it down on the page, so that we may all remember and consider the shared charms and terrors of a life on earth. In other words: To make the world a smaller, incrementally more understood place.

When you’ve lived and worked in places where writing can get you killed, where the act of telling the truth can take down powers, it’s hard to have anything but soaring notions of what writers can and should aspire to do. But with Twitter and the simplification and power of self-publishing, the idea of just who is a writer has gotten more complicated. Now we’re all writers, a fact both exhilarating and maddening, with implications and possibilities that aren’t yet totally clear.

Something joyful and pure, with a kind of power and grace that can argue quietly but forcefully for the madness of criminalizing thought. Oops, the first thing I think of is Senselessness, the masterpiece by Horacio Castellanos Moya, whose sly and terrifying commentary on state violence is really a big fuck you to any seat of tyranny. So maybe that’s a good grenade?

Darkly, this is a line that’s being obliterated by technologies such as facial-recognition software and license plate cameras. Total information is upon us, so the question is not does the data exist or will it be used, but how should we mourn the extinction of privacy? I confess, rather than feel outraged, I’m mainly curious: what does it mean – for a writer, a citizen, a father – that someone knows everything? We’ll all know soon enough.