The PEN Ten with Mona Eltahawy 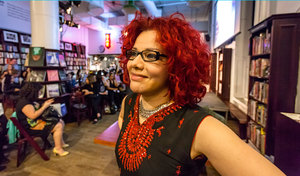 This week, we talk with Mona Eltahawy, an Egyptian-American freelance journalist and commentator. Her essays and op-eds on Egypt, the Islamic world, and women’s rights have appeared in The Washington Post and The New York Times. She has appeared as a guest commentator on MSNBC, BBC, CNN, PBS, Al-Jazeera, NPR, and dozens of other television and radio networks. She lives in Cairo, and is the author of Headscarves and Hymens: Why the Middle East Needs a Sexual Revolution, released this month by FSG.

At the PEN World Voices Festival, Mona Eltahawy will be participating in the events Opening Night: The Future Is Now on May 4 and Mona Eltahawy: Headscarves and Hymens on May 6.

When did being a writer begin to inform your sense of identity?
I was 16 when I knew I wanted to be a journalist. I became one when I was 21 and switched from news reporting to opinion writing when I was 34. That was when I started identifying as a “writer” and not a “journalist.”

Whose work would you like to steal without attribution or consequences?
Zadie Smith.

When, if ever, is censorship acceptable?
Never.

Have you ever been arrested? Care to discuss?
In November 2011, during a protest on Mohamed Mahmoud Street near Tahrir Square. Riot police beat me, broke my left arm and right hand, and sexually assaulted me. I was detained for six hours by the Interior Ministry and six hours by Military Intelligence, who interrogated me while I was blindfolded.

In September 2012, I was arrested in New York at the Times Square subway station after, in an act of protest, I spray painted over an ad I considered racist and bigoted. I didn’t black out the words but used pink spray paint as an act of nonviolent civil disobedience. I was charged with criminal mischief, making graffiti, and possession of a graffiti instrument. I was going to stand trial, but the judge eventually dismissed the case in the interest of justice.

Obsessions are influences—what are yours?
I’m obsessed with Twitter. I live there!

What’s the most daring thing you’ve ever put into words?
A poem I wrote called “Sekhmet’s Tits.” And writing in my book about why I waited so long to have sex.

What is the responsibility of the writer?
To provoke and to prod and to find the places that society tries to hide, and to uncover them.

While the notion of the public intellectual has fallen out of fashion, do you believe writers have a collective purpose?
Yes, I believe it’s the writer’s job to tell society what it pretends it doesn’t know.

What book would you send to the leader of a government that imprisons writers?
The Handmaid’s Tale because the unchecked torment of women indicates a willingness to torment all.

Where is the line between observation and surveillance?
Governments deliberately muddy it and continually push it, but it’s clear to even them that surveillance is wrong, or else they wouldn’t hound whistle blowers such as Edward Snowden.

Check out the list of nonfiction books curated for PEN America's #WhatToExpect2020 reading list. These books provide historical context around this moment and can help you navigate disinformation, voter suppression, and more: https://pen.org/what-to-expect-when-youre-electing-reading-list/