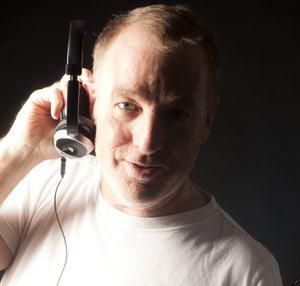 The PEN Ten is PEN America’s biweekly interview series curated by Lauren Cerand. This week Lauren talks with Michael F. Moore, the chair of the PEN/Heim Translation Fund and an interpreter/translator from Italian. He has interpreted for popes, presidents, but no crowned heads. He puts his versatility on display this month with the publication of two translations, the wildly-funny contemporary novel Live Bait by Fabio Genovesi (Other Press) and the moody masterpiece of sexual awakening, Agostino, by Alberto Moravia (NYRB Classics).

When did being a translator begin to inform your sense of purpose?
More like my sense of survival! I lived in Italy for eight years, on my own, enrolled at the Brera Fine Arts Academy in Milan. Already shy in English, I worried that every time I opened my mouth the whole world would burst into laughter. Ordering at a restaurant was a harrowing experience. When I did summon the courage to speak, I had no idea what I was ordering, and quickly learned the names of things I didn’t like: fegato (liver), animelle (sweetbreads), insalata russa (don’t ask).

Once I’d found my footing, I started to help my fellow international students, interpreting for them at the oral exams given at the close of the school year. “Say anything,” I instructed them, “and I’ll make it sound good in Italian.” One professor caught on and asked, “How can her four words in English become your forty in Italian?” “English is very concise,” I replied, concisely.

Translating and interpreting became my livelihood as a foreigner, and after my move back to America, my vocation. As an interpreter I’m a bit of a stage mother, pushing the writer or director for whom I’m interpreting to jump into the conversation (Forza! Dai! Sfondi! I whisper). The authors I translate are like house-guests. I don’t let them sleep with me: they get the sofa bed.

Whose work would you like to steal without attribution or consequences?
The Gospel according to John, in the King James translation, but (speaking of consequences) it would probably be a sin.

Where is your favorite place to translate?
I have a little cottage with a monk’s cell in the back. Just big enough for a small desk and a cot. I put a bird-feeder right outside the window, and every time I get stuck I look up and see a cardinal, a finch, or a chickadee flitting about. My cat likes to watch them, too.

Have you ever been arrested? Care to discuss?
Only in my dreams. But I do have a guilty conscience. I’ve had to submit to background checks, and each time I’m convinced they’re going to discover where I hid the bodies.

Obsessions are influences—what are yours?
From my earlier responses, I’m sure you can guess: Sin. As a child I used to worry that the longer I lived, the more sins I would commit, and I’d never get into Heaven. For a while I thought that the only solution was to be a child martyr: die for your faith, pure and young, and be welcomed into God’s arms. I only hoped that my execution would be quick and painless. Over time my definition of sin has matured—it had to, since I’ve already committed some of the classics (except murder)!—and become more secular.

What’s the most daring thing you’ve ever put into words?
I sometimes have to translate a sex scene, which makes me squeamish. I want to cover my eyes with my hands, but then I wouldn’t be able to type.

What is the responsibility of the translator?
To get it right. Very few contemporary writers are translated into English, and the few that are often get only one shot at it. As a translator you have to do not only a perfect reading of a text—understanding every nuance, every flourish, every twist—but also a perfect rendering of it. I hate hyperbole, but a translator really has to put everything he or she knows and feels and has lived into the translation. Every now and then I fool myself into thinking a translation is going to be easy—usually before I sign the contract. It never is.

While the notion of the public intellectual has fallen out of fashion, do you believe that those who engage with the written word have a collective purpose?
Well, not ALL of them.

What book would you send to the leader of a government that imprisons members of the artistic and literary world in retaliation for their expression?
To be honest, one of my latest translations, The Drowned and the Saved, by Primo Levi. Better than any writer I know, Levi, an Auschwitz survivor, captures the everyday violence of life in prison, and dramatizes its horrors and injustice through the eloquence of his voice, the fullness of his humanity, and the richness of his culture.

Where is the line between observation and surveillance?
Maybe etymology will help. “Observe” derives from Latin: ob (= toward) + servare (to attend to; to look at). “Surveillance” is of more recent coinage: sur (over) + veiller (< Lat. Vigilare, to watch). Looking toward or looking over: the devil lies in the particle. One is something we do; the other is done to us, in the guise of protection (to look over) but with the intent of control (to look over).