The PEN Ten with Maxwell Neely-Cohen 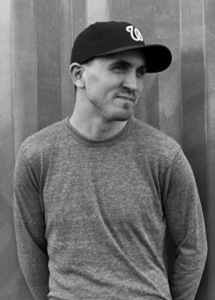 The PEN Ten is PEN America’s biweekly interview series curated by Lauren Cerand. This week Lauren talks with Maxwell Neely-Cohen, whose first novel, Echo of the Boom, was published this past April. Born and raised in Washington, DC, he spent his teenage years skateboarding and DJing. His shorter work has appeared in The Millions, The Atlantic, The New Inquiry, and This Recording. He lives in New York City. He hopes to do an event soon with PEN American Center, discussing video game design and narrative implications for free expression around the world.

When did being a writer begin to inform your sense of identity?
In college, when I started to feel bad that I wasn’t writing. When I’d be doing something else, and I suddenly felt like I should have been writing instead.

Whose work would you like to steal without attribution or consequences?
Margaret Atwood. J.G. Ballard. Nina Simone. Joan Jett. Frank Ocean. Kathryn Bigelow. I think I secretly wish I could steal everyone’s work, that I could reappropriate and remix all of art and literature into some singular cohesive body, but I would want the attribution and the consequences.

Where is your favorite place to write?
In those unexpected places where I do not usually write but am forced to due to a stream of ideas. In incoherent smartphone notes while walking frantically down a street. On hastily acquired scraps of paper on an airplane. In bed, right before sleep, hammering the light back on to record some moment of apparent genius. I love those places. I love the panic that resides in them.

Have you ever been arrested? Care to discuss?
I have never been arrested, though as a skateboarder I had the privilege of spending long moments of my adolescence running from cops. It was strange to engage in an activity that permitted you a limited glimpse of what it felt like to run from the law, (mostly) without deadly or devastating consequences. In fact, in most of the spots where you had to run, like Freedom Plaza in DC, it was a routine, almost a game. A few times a day they’d come in and all the skaters would scatter, and then we would rush right back in once they had left.

I was only detained once, only caught once, the very first time, when I was 13, at LOVE Park in Philadelphia. I was alone. Two undercover cops tackled me and then gave me a ticket. My father, a law professor and longtime human rights activist, not only paid the ticket, but proudly framed it and hung it on the wall.

Obsessions are influences—what are yours?
One of my best friends, Durga Chew-Bose, pointed out to me that I am obsessed with skin in my writing. I describe it and keep describing it ad nauseam. So skin. And amplified noise, airplanes, cities, networks, markets, and looking at history in the biggest (and smallest) possible timescales.

What’s the most daring thing you’ve ever put into words?
The idea that children are people. That violence can be justified. That nuclear weapons might have saved the world. That chaos and randomness control our lives more than we might like to admit.

What is the responsibility of the writer?
I think that publishers and editors have a great deal of responsibility, but I’m not sure that writers do. Write the best book you possibly can. That’s it.

While the notion of the public intellectual has fallen out of fashion, do you believe writers have a collective purpose?
I am uncomfortable with collective purposes. I would prefer to think that writers do not have one, that creatives are a frothing mass not so easily defined. I may be wrong. We might not be that cool.

What book would you send to the leader of a government that imprisons writers?
The End: Hamburg 1943 by Hans Erich Nossack.

Where is the line between observation and surveillance?
I do not think there is a line. Observation always has consequences. Sometimes I think “harmless” observation is in fact more threatening than surveillance with a specific objective. There is always an “observer effect,” to steal physics parlance, and the possibilities from a blind observation can spiral in unimaginable directions.