The PEN Ten with Marwan Hisham 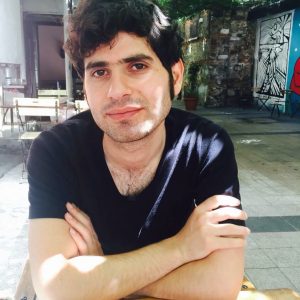 The PEN Ten is PEN America’s weekly interview series. This week, Public Programs Coordinator Lily Philpott interviews Marwan Hisham, coauthor of Brothers of the Gun, published this month by One World. See Hisham’s coauthor and illustrator, Molly Crabapple, at PEN Out Loud: Writing War with Alexis Okeowo on May 24 at the Strand Book Store.

In my opinion, a writer’s identity comes from the environment they grew up in, that culminates in their ideas and way of conveying them. Attitude influences writers most. My identity made me skeptical and critical, especially of myself.

Through skepticism. One has to question themselves every now and then to make sure they don’t get blinded by their own “reality.” In this book, I stick to my personal observations, and I don’t trust them  For me, it’s a continuous struggle against my own prejudices. Truth lives longer in time.

I think so much of it is about the method. People sometimes are more drawn to writers from other cultures because writers carry their own cultures in their words. I love this cultural melding and interchange because variety is an essential element to beauty. I love every form of fusion between different cultures. Apart from beauty, this fusion achieves the sublime goal of universality. Anything less than fusion is basically stealing that doesn’t add up to much.

4.“Resistance” is a long-employed term that has come to mean anything from resisting tyranny, to resisting societal norms, to resisting negative urges and bad habits, and so much more. It there anything you are resisting right now? Is your writing involved in that act of resistance?

Allow me to “think regionally” for now instead of globally. Due to the conflicts we see in the Middle East, and especially in the Arab World that I find myself immersed in, I now have a clearer vision of my fight: social change in our local communities. Seven years ago I was universalist; now I don’t have that luxury. I once believed change must come from top down. Now I think the opposite. We’re suffering the consequences of addressing our problems the wrong way. You must build the individual first then the society, not the other way around. I’m afraid in this regard, we have a long way to go, but it’s the only way.

I think misinformation, which we now see can lead to certain misconceptions and stereotypes, is the greatest threat to freedom of expression. People take many things for granted now and leave only a narrow margin for debate. I mean here a meaningful debate, as opposed to verbal fighting between two or more viewpoints, entrenched in their convictions with no desire to seek rationality or common ground. This is something we see a lot of, unfortunately. As for myself, I grew up in a community that, through a mix of religion and tradition, fights new ideas and opposes speaking freely.

This book: Brothers of the Gun.

On social media, probably when I first started. I started with no depth and little knowledge about what I was trying to convey, but then this is the natural course: We mature with time.

I used to spend hours of my daily life on social media. Now I only keep myself updated with news for a few minutes then sign out. I avoid that toxic habit of arguing aimlessly about things I am not equipped properly to argue about (which is much of the discourse on social media now).

9. Your memoir of the Syrian war, Brothers of the Gun, was cowritten and illustrated with Molly Crabapple. What was your process like? How did you and Molly communicate and settle on a single vision for the book?

The idea of making it an illustrated memoir was based, in form and content, on our third collaborated piece from Aleppo that Vanity Fair published. I wrote an essay about a city I came back to see after three years of war and compared it to the city I’d known during university. What wars do to people and cities is a major theme in Brothers of the Gun. I moved to Turkey for it, and Molly gracefully flew maybe a dozen times to Istanbul to further work on it with me. Luckily, I’d already had notes I’d written back in Syria that she liked. These notes formed the backbone of the story.

10. If you could require the current administration to read any book, what would it be?

That’s too hard a question. There’s certainly no one single book you can read to completely understand the Syrian tragedy. But there are a group of amazing journalists and writers—Syrians and non-Syrians—who tried successfully to diagnose and describe the situation. For example, Rania Abouzeid’s No Turning Back: Life, Loss, and Hope in Wartime Syria provides a good understanding of the dynamics of the war in Syria. (If you meant any book about any subject, I would say The Handmaid’s Tale!)

The PEN Ten with Alicia Kopf