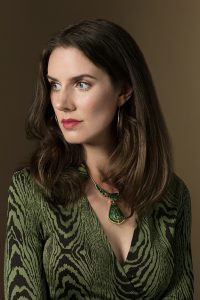 I believe in identity as something infinite—certainly plural—rather than something definite or easily defined. My identity? I’m a woman. A sober drunk. White. Upper-middle class. I’m a daughter, a mother, a professor. All of these truths shape my writing, but it’s hopefully also true that identity is more than a constellation of demographic star points, and that its influence on writing is more complicated as well.

I believe in recognizing and confessing the far reach of subjectivity, admitting that so often “objective truth” is a Trojan Horse holding far more subjective perceptions. But I also believe that nonfiction writing has an obligation to hold itself accountable to truth as much as possible. What does that mean? In the case of my own work on this book, it meant I did my homework, photographed my archival findings, transcribed my interviews, and paid a fact-checker to spend many, many hours double-checking everything in my book. That kind of due diligence especially matters now.

I think the line between inspiration and appropriation has a lot to do with how—and how much—credit is given, as well as what kind of power or visibility divide exists between the initial source and the adapter.

As an American, like so many other Americans, I’m not only invested in resisting our current administration, I’m also actively resisting both hopelessness and complacency—as well as the belief that art is irrelevant in politically troubled times. We need it now, and so yes—I would say, in whatever small way, my writing is part of that resistance.

Globally, there are plenty of explicit threats to free expression, but I think right here at home, in America, the ways in which humanity is being disrespected on a daily basis—through mass incarceration, deportation, denial of a humane health care system, and countless other injustices—are undeniable enemies of free expression as well.

When I was first starting to write nonfiction, and I was just starting to confront the emotional and ethical dynamics of writing about other people’s lives, I wrote down details about a woman’s life that she had confessed to me as a friend. It was a betrayal. I removed them from whatever media I could, and tried to carry the experience with me—to allow it to inform my practice since.

Ha! All of the above.

9. You are a self-proclaimed “real geek about archives,” referring to your love of archives as your version of “opening other peoples’ mail or stealing their diaries.” We are pretty big geeks about archives too. Could you tell us about one or two of your favorite archival discoveries from your time researching your forthcoming book, The Recovering?

First of all, this hyperlink just cost me a half hour of my life. The PEN America archives are amazing! Ernesto Cardenal talking about Reagan’s embargo against Nicaragua—I love it. I’m glad to encounter kindred archive geeks anywhere. I had so many incredible archival discoveries during the seven years I spent working on The Recovering. At the National Archives, looking through the papers of the Narcotic Farm—a federal prison hospital for addicts that opened in Kentucky in 1935—I found, alongside all the institutional records, a series of letters written by addicts, begging to be admitted. Their desperation—amidst the blanched paperwork of bureaucracy—was really moving to me, a reminder of how certain veins of despair and desire echo and resonate across the decades.

10. Finally, if you could require the current administration to read any book, what would it be?

The PEN Ten with Alicia Kopf

The PEN Ten with Behrouz Boochani