The PEN Ten with Lauret Savoy 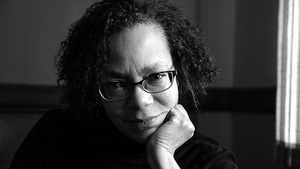 The PEN Ten is PEN America’s weekly interview series. This week, we speak to Lauret Savoy, author of the memoir Trace, which was recently longlisted for the 2016 PEN Open Book Award. A woman of mixed heritage, she writes about the stories we tell of the origins of the American land and those we tell of ourselves on this land. She is a professor of environmental studies and geology at Mount Holyoke College, where she explores the intertwining of natural and cultural histories. Her other books include The Colors of Nature: Culture, Identity, and the Natural World, Bedrock: Writers on the Wonders of Geology, and Living with the Changing California Coast. She lives in Leverett, Massachusetts.

Imagining that I was a writer grounded my sense of self in childhood. Building that imagination into my life came later in fits and starts. I read voraciously as a girl—history, literature, natural science—much in the hope of coming to understand a “world” that held great beauty yet also showed great cruelty. As a young adult I felt removed from any integrity or wholeness of living because so much of my acquired knowledge came from inculcated divisions. Only slowly did I learn that I’d remain complicit in my own diminishment unless I stepped out of the separate trap: you from me, brown skin from depigmented skin, relations among people from relations with the land. I had to stop silencing myself.

A few years ago I found in my mother’s basement a large box that my father had packed and sealed before his death when I was a teenager. Stacked neatly within it, brittle, dusty, and yellowed, were two novel manuscripts, along with family letters and photographs taken across decades, journal notes, short-story ideas, correspondence with his publisher, newspaper clippings, and an old proposal for a Guggenheim Fellowship. I lived with Willard Wilson Savoy for more than 16 years but didn’t know the man who wrote and saved these things. That my father identified—no, imagined—himself first and foremost as a writer, I never knew. Nor did I know that more than a decade before my birth E. P. Dutton had published his “passing” novel Alien Land and had him under contract for two more books. But the next work, about a “Negro” artist from the segregated nation’s capital who feels the pull of Communism, was rejected and the contract cancelled. The angry, bitter man I knew many years later did not write.

I have since wondered how much the deep, unspoken hunger or need of a parent can touch a child, even marking a path for her to follow.

I would not “steal” from other writers so much as acknowledge how their works have touched me, fed me, scarred me, made me bleed.

A simple answer might be never. But when is anything simple?

U.S. Supreme Court Justice Benjamin N. Cardozo noted that “freedom of expression is the matrix, the indispensable condition, of nearly every other form of freedom.” Yet struggles for freedom of expression in this country have occurred since day one and continue in the face of ongoing and new threats (such as attempts to restrict Internet activity or wider government surveillance of citizens).

A rigid uniformity (or uniform rigidity) of acceptability continues to be defined and socially reproduced generation to generation by subsets of the whole in this nation. Unrecognized or hidden forms of censorship have silenced countless numbers. And who continues to bear the brunt but those at the margin, the disenfranchised, the economically “poor,” those working for civil and human rights. What is seen on the surface is just the tip of a long-forming iceberg.

Consider a system once embraced in American democratic society that relegated the voices and ideas of those enslaved as inconsequential or non-existent, even denying literacy. A system that used force to silence. Its public history remains unfinished business.

Perhaps some might not think of this as censorship, but how a society remembers can’t be separated from how it wants to be remembered or from what it wishes it was. Silences have reinforced a status quo that continues to privilege what’s always been privileged in popular history, such as celebratory offerings of “the American experience” that still exclude slavery and its aftermath or the dispossession of Native peoples from homelands.

Censorship in the past still wounds us today. More recently, do we even know how many were silenced during the McCarthy period in the 1950s? After obtaining my father’s FBI file through a Freedom of Information Act request, I suspect the silencing of his writing had multiple causes.

Almost once, yet I’m not sure how close it was. Other students and I were told that we would be arrested for staging a sit-in at Princeton’s Firestone Library in protest of the university’s investments in companies doing business in apartheid South Africa. It was a tense situation, with rumor spreading quickly when facts were unavailable to check their growth. We were eventually released.

Time, memory, silence, traces of the past, and the search for home—all are tied together.

Much of my adult life has drawn from questioning how to put the eroded world into language, how to re–member fragmented pasts-into-present. In my search for the memory of generations, I recognized that embedded silences and losses of continuity (in self-knowledge, kinship, and connection to homeland) were an erosion not entirely unlike that occurring on Earth. I also realized that to live in this country is to be marked by residues of its still unfolding history, residues of silence and displacement across generations.

Spoken statement: I love you. Spoken question: Do you love me?

Written words: My new book Trace offers my search for and discovery of the marks noted above. It required a searching vulnerability that perhaps has exposed more about my parents than they would want known.

Responsibility, the ability to respond, the capacity to attend, to stand behind one’s acts. It is a key word for me. I have a responsibility to re-member, to piece together the fragments left as a way of pushing back forgetting, forgetfulness. By confronting emptiness and erasure, the writer can un-forget.

But this isn’t all. Helene Cixous’s words come to mind. Reflecting on the works of Clarice Lispector, Cixous described writing as “touching the mystery, delicately, with the tips of the words, trying not to crush it, in order to un-lie.”

Franz Kafka’s words fit as well: “A book must be the axe for the frozen sea inside of us.” The writer can wield the axe against assumptions, against thoughtless complacency, against a segregation of ideas, and against a sense of safety in the status quo, in things unchanged and unchanging.

One of the most difficult things to cultivate is a capacity to ask significant questions about our lives in a larger world, and about lives not our own. I think self-protective silence and denial have kept too much of America from even knowing who “we the people” really are, and have kept a language of possibility impoverished. By this denial, this not-remembering, we are dis-membered, broken into pieces.

We do exist in relation to each other. Writers can reach across barriers, many touching many. I imagine a calling back and forth, an exchange that could save lives.

What book could be “the axe for the frozen sea inside of” that leader? I don’t know what would touch such a person in the most elemental way to crack through. The Man Died by Wole Soyinka? Man’s Search for Meaning by Viktor Frankl? The Diary of Anne Frank?  Carolyn Forché’s anthology Against Forgetting: Twentieth-Century Poetry of Witness? Fahrenheit 451 by Ray Bradbury? I don’t know. But I would if I could deliver the axe personally.

Where ignorance, suspicion, and/or fear trigger the intent to control. The continued monitoring of citizen-activists in the Black Lives Matter movement by the Department of Homeland Security is just one example of surveillance invading the privacy of thoughts, words, actions, and lives.

Read an excerpt of Trace here.