The PEN Ten with Jynne Martin 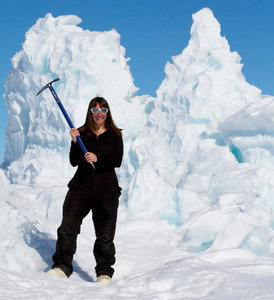 The PEN Ten is PEN America’s weekly interview series. This week, we talk with poet Jynne Martin. Her poetry has appeared in Granta, The Believer, The Boston Review, Ploughshares, Slate, Flavorwire, and on the PBS NewsHour with Jim Lehrer. Her nonfiction has appeared in Glamour, Food & Wine, and The Antarctic Sun. She was a 2013 Antarctica Writer-in-Residence, and lives in New York City. Her new book of poems We Mammals in Hospitable Times, is forthcoming from the Carnegie Mellon Poetry Series on February 3.

As a moody, inward child, books were my everything, and the importance of my own writing in my private life (diaries, poems, letters) soon followed. But I still turn bright red when people call me a poet. It feels like it’s a personal secret.

Saint-John Perse. Or maybe not so much his actual work as his audacious authority and kaleidoscopic vision. The poem “Anabasis”—yeezus: “Milch-camels, gentle beneath the shears, sewn with mauve scars, let the hills march forth under the facts of the harvest sky—let them march in silence over the pale incandescence of the plain; and kneeling at last, in the fantasy of dreams, there where the peoples annihilate themselves in the dead powder of earth.”

Anyplace snowbound. I love that muffled quiet of a heavy snowfall, and the bright white light. Antarctica’s McMurdo Station Library, with huge windows overlooking the giant ice shelf, is my favorite so far.

No, and not for lack of trying.

I live in a time and place where poetry is rarely read, much less taken as a provocation. I will reserve the term “daring” for writers in other parts of the world, and other parts of history, who face actual horrific consequences.

The same as the responsibility of all humans. To notice all forms of beauty, expand our capacity for compassion, laugh every day, and cause as little harm to this earth, its animals and people, as possible.

This is a very hard question to answer. If we do, it has something to do with broadening and expanding our understanding of one another, of the human experience, so that we can move towards a place of greater compassion, kindness, and wonder.

Anna Akhmatova’s Requiem. “Instead of a Preface” haunts me daily.

If only we lived in a world of lines. But as Alan Watts says, “The world is a marvelous system of wiggles…You’re trying to straighten out a wiggly world, and now you’re really in trouble.”